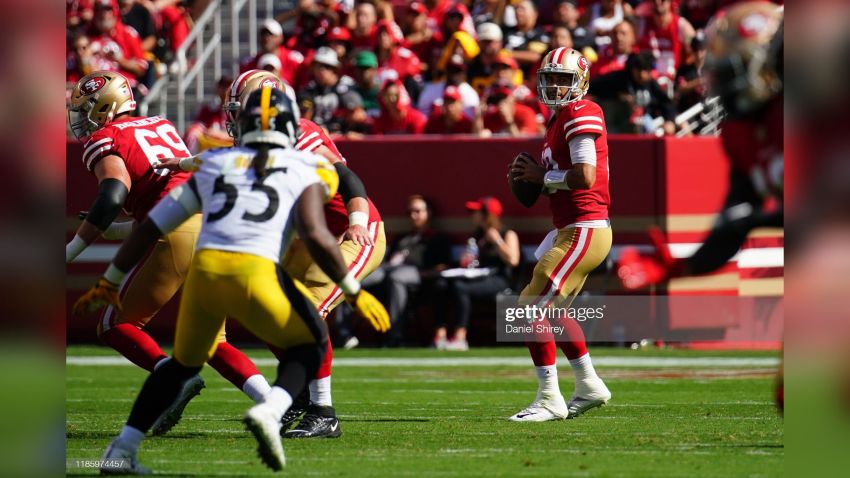 Deadlines have a tendency to spur action, and the start of training camp is a deadline of sorts, generally when most teams want to have their preliminary roster pretty buttoned down. That’s especially the case if you’re talking about the quarterback position, which is why we saw Baker Mayfield finally get moved.

With the former Cleveland Browns ‘franchise’ quarterback now in Carolina, attention turns to Jimmy Garoppolo, who has also widely been expected to be dealt this offseason by the San Francisco 49ers. But could it actually be Cleveland that ends up trading for him? It’s not that far-fetched under the right conditions, suggests former Pittsburgh Steelers cornerback Bryant McFadden.

“Let’s say Cleveland gets word that Deshaun Watson will miss a full year. I understand you have Jacoby Brissett, a guy who has been a starter throughout his professional career but hasn’t really been super consistent. Would the Browns make a move to try to go get Jimmy Garoppolo and bring him in for a year?”, he asked, while appearing on The Maggie and Perloff Show, with guest host Zach Gelb.

The Browns, of course, acquired former Houston Texans Pro Bowl quarterback Deshaun Watson this offseason, pulling off a massive trade to get him in exchange for three first-round picks as the headlining compensation. They also gave him a fully-guaranteed five-year, $230 million deal.

And he is facing a potential suspension, which the NFL has argued should be of indefinite length but at least a year. If the league ends up getting its way, the Browns are currently expected to move forward with Brissett as their starter for 2022. But why not go after Garoppolo for the year if you really think you can win? Especially if you’re in the AFC North?

“You’ve got to make sure that you’ve got a guy at the quarterback position that can handle that type of pressure”, McFadden said. “I understand, we hear the criticism with regards to Jimmy G, but he’s a winner. He’s won ball games. He’s gotten to the Super Bowl. He’s played in relevant ball games. He was just in the playoffs a year ago”.

“That would be the team that could potentially be an outside suitor for Jimmy G, especially if that Play 60 shoulder is healthy. If that arm is healthy and they get word that Deshaun may miss a full year, I wouldn’t be surprised to see Cleveland make a play at Jimmy”, he added.

One thing that actually works out to the Browns’ advantage is the fact that Garoppolo is in the final year of his contract. That was otherwise seen as a hurdle in trying to deal him, but Cleveland would only be bringing him in for a one-year arrangement as they hope to have Watson available in 2023.

It could work out for Garoppolo as well, as he gets a full year to be a starter and then has an opportunity to hit the open market as an unrestricted free agent. Of course, none of this means anything if Watson doesn’t actually get suspended for the season, but I do find it interesting to think about, and it’s not altogether unlikely that he does get suspended.