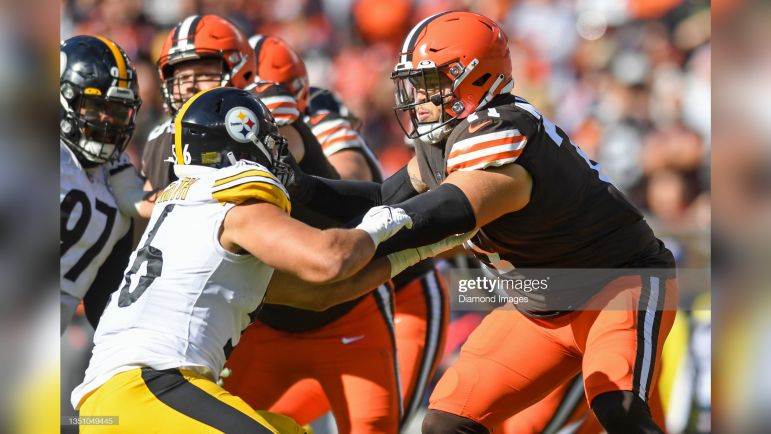 The Cleveland Browns have one of the better offensive lines in the league, although the decision to move on from center J.C. Tretter this offseason does leave an unknown in the middle of their lineup. Where they are still looking for more of a declarative answer, as well, is at left tackle, with former 10th-overall draft pick Jedrick Wills entering his key third season.

The Alabama product started 15 games as a rookie in 2020, but was limited to only 13 games last season. While he has performed to a satisfactory level up to this point in his career without being a liability, however, a top-10 draft pick at left tackle should certainly meet higher expectations.

“I’m looking for a quantum leap in his play”, offensive line coach Bill Callahan told Scott Petrak for The Chronicle-Telegram. “I think we all are. He wants to do it. So if it comes from him and he wants to do it, he wants the progress, that’s 99 percent of it”.

As you might guess, Wills expects the same of himself. He told Petrak that he just wants to “live up to expectations”, and to “prove that I’m one of the best tackles in the game”. For whatever it might be worth to you, Pro Football Focus graded him as the 38th-ranked tackle in the league last season among qualifying players with an overall grade of 66.1. That is better than both of the Pittsburgh Steelers’ starting tackles, with Chukwuma Okorafor ranked 44th (62.2) and Dan Moore Jr. ranked 50th (57.5).

Said Callahan about Wills’ comments about his own desire to live up to his draft pedigree, “That’s awesome. It’s all intrinsic, it’s all self-motivated. So coming from Jed, I think that means a lot. He’s pretty focused”.

While the Browns have dwelled within a mire of mediocrity for decades upon decades, the one place where they have had a true understanding of excellence is actually at left tackle, as they had the honor of being the home of the great Joe Thomas for every snap of his career. The 2007 third-overall draft pick never missed a snap from his first to his last from 2007 through 2017, finishing as a 10-time Pro Bowler and nine-time All-Pro.

It doesn’t even need to be said that Wills is not Thomas, because there are only a handful of tackles throughout the history of the game who were as good. But Cleveland doesn’t need another Joe Thomas; they just need another high-quality starting left tackle, and Wills does have it in him to be that.

“I feel like I’ve had a really good offseason. They’ve been really honed in on telling me I’ve been doing good”, he told Petrak entering training camp. “I’ve been two years into this and I think I’ve held my own pretty well. So really just trying to go above and beyond and just prove everybody wrong”.