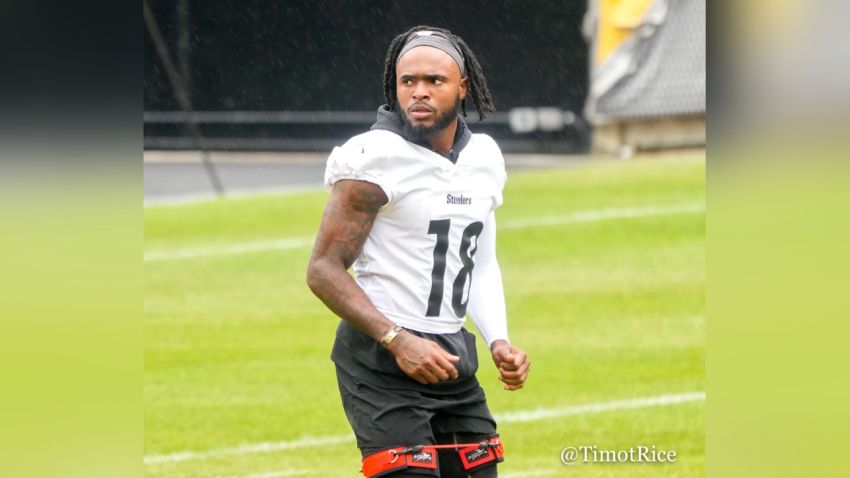 On Monday morning Bleacher Report writer Kristopher Knox published a piece proposing five “fireworks” trade ideas that could transform the league for the 2022 season. He points to no superstar player being no longer off-limits after seeing the likes of Davante Adams, Tyreek Hill, and Khalil Mack being dealt already this offseason. While he acknowledges that these trade proposals are hypothetical in nature, Knox also wanted to pose five “realistic” possibilities of deals that could get done prior to the 2022 season getting underway.

Knox made sure to incorporate one current Pittsburgh Steelers player in his article, suggesting that a disgruntled Diontae Johnson could get traded to the Dallas Cowboys for a 2023 second round pick.

“If the Steelers aren’t willing to lock up Johnson, they could trade him out of the conference and to the Dallas Cowboys, who lost both Amari Cooper (traded) and Cedrick Wilson Jr. in the offseason. Dallas is talented enough to make a Super Bowl push in the NFC but could use another veteran receiver to remain in the upper echelon. Dallas has CeeDee Lamb, drafted Jalen Tolbert and signed Johnson’s former teammate, James Washington, but presumed No. 2 receiver Michael Gallup is coming off a torn ACL. Adding Johnson would help ensure that Dallas’ top-ranked offense keeps rolling. The Steelers, meanwhile, would get more in return than they would by losing Johnson for a compensatory pick in 2023 free agency.”

Now, is a trade of WR Diontae Johnson out of the conference to a team like Dallas plausible? Sure. Dallas may have Lamb like Knox suggests, but outside of him and Dalton Schultz, the Cowboys lack proven receiving talent with Gallup coming off a significant knee injury and may not be ready for Week 1 as well as Washington and rookie Jalen Tolbert likely more complimentary receivers this season than a proven running mate next to Lamb in 2022. Pittsburgh could also use the draft capital with likely no compensatory picks coming in 2023 as well as have Chase Claypool, George Pickens, Calvin Austin III, Miles Boykin, and Anthony Miller on the depth chart if they don’t think the can re-sign Johnson.

However, while recouping a second-round selection would be appealing for Johnson from Pittsburgh’s perspective, I’m going to pour some cold water on this take. Dallas likely will be looking to pay Lamb potentially as early as next season and already locked up Gallup last offseason to a five-year contract with a base value of $57.5 million. Dallas would trade for Johnson with the intention to re-sign him, and the probability of them committing that amount of cap dollars to Gallup, Johnson, and Lamb is slim-to-none.

The @dallascowboys re-signed WR Michael Gallup to a five-year contract on Monday.

Knox also points to Pittsburgh entering a rebuilding year in 2022 which personally I don’t see being the case. We all know the Pittsburgh Steelers franchise isn’t in the business of “tanking” for draft position as Art Rooney II has mandated that the team competes for championships every season and HC Mike Tomlin has followed that narrative, never having a losing season at the helm stating, “the standard is the standard.” Outside of Ben Roethlisberger retiring, an argument could be made that Pittsburgh’s roster is better now than the one that took the field a year ago, and the combination of Mitch Trubisky/Kenny Pickett could surprise people in 2022, providing more mobility and explosive play ability that Ben lacked in his final season.

I understand the suggestion by Knox in this article, and I do think that it is plausible that Pittsburgh could investigate dealing Johnson if they feel no extension could be reached and they get an offer they cannot refuse. Still, unless they are getting an Adams/Hill offer for Johnson, I don’t see a trade being probable as Pittsburgh will let Johnson play out the final year of his rookie deal and either decide to extend/franchise him after the season or let him walk and recoup a 2024 comp pick as they look to compete in the AFC in 2022.

Keep getting questions about the Steelers trading Diontae Johnson. For starters, no team is likely going to trade anything of value unless they get permission to negotiate a deal with him ahead of time. Second, not the Steelers MO, unless Khan changes things up. #Steelers #NFL

What are your thoughts on the trade suggestion mentioned above? Do you see it as a plausible scenario? Is it probable, or likely just more offseason fodder? Please leave your thoughts in the comments section below and thanks again for reading!