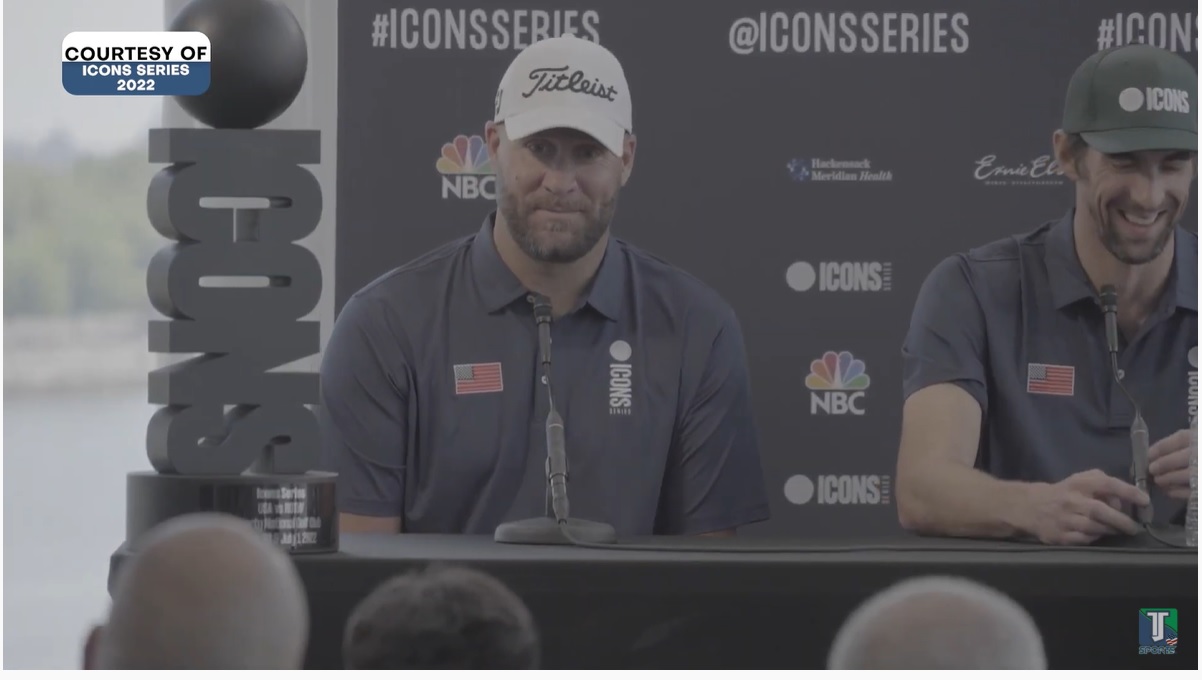 Ben Roethlisberger’s done playing football. But he isn’t done competing. He’s focused in on another sport he loves, golf, and admitted Friday he gets way more nervous walking up to the tee than he ever did staring down the blitz. Part of the Icon Series team that includes the likes of Michael Phelps, Roethlisberger was asked about his level of nerves.

“I get way more nervous on a first tee than I do in front of 80,000 people for a Super Bowl,” he said in a press conference courtesy of the TJ Sports USA YouTube channel. “Way more nervous.”

Roethlisberger has been an avid golfer throughout his life and would spend his offseasons on the links. Basically any Bruce Arians story not related to something that happened on a football field took place on a golf course. Like many retirees, his time to hit the green has shot up and he’s participating in a celebrity tournament this weekend that also brought on names like Mike Vick, John Smoltz, and boxer Canelo Alvarez. Fred Couples serves as team captain.

While golf may seem more relaxing, no crowd of screaming fans (except for the inevitable “Get In The Hole” guy) and certainly no 275-pound pass rushers bearing down on him, Roethlisberger said that slow pace speeds up his heart rate.

“In golf, you slow everything down. Sometimes your mind is racing and you get caught thinking about too many things. It’s such a mental game. Football’s mental too but I think it’s why people like [golf] so much. It challenges you. It’s you versus the course…you can always challenge and try to beat the course.”

In football, you’re always competing against the opposition. Anyone can make an offense look good on air, you’ll see it every day in warmups during camp. Golf asks you to compete against others but if you’re slicing golf balls into sand traps and the water, it doesn’t really matter what the other guy’s doing.

Roethlisberger also pointed to other clear differences between the two sports.

“Patience is the most challenging thing. Slowing down…from the time that the coach gives you the play to the time I have to tell the team the play in the huddle then we have to break the huddle and get to the line of scrimmage, you’ve got like 30 seconds. So my wife tells me all the time to stop talking so fast because I have a bad habit of it.”

In golf, it takes literal minutes between a player’s shots. In football, it’s within about a minute from snap-to-snap. There’s speed, there’s urgency, there’s clocks that tell you when the ball needs to be snapped, when the half expires, when the game ends. And Roethlisberger’s been in plenty of those time-crunch moments, especially last season. Last year, he led the league in game-winning drives (seven) and fourth-quarter comebacks (six). Both were career highs. Of course, his most famous comeback came in a Super Bowl, leading an incredible drive to beat the Arizona Cardinals, capped off by one of the greatest plays in NFL history, Roethlisberger throwing a perfect pass followed by an incredible Santonio Holmes catch.

With a par of 72, The Icon Series takes place at the Liberty National Golf Club in Jersey City, New Jersey. The event kicked off yesterday but the broadcast portion starts today. We’ll update you with the results later in the week.

Here is how the singles finished in Icons Series 2022. We have our champions. 🏆🇺🇸 #IconsSeries pic.twitter.com/eM74HOA4Fe