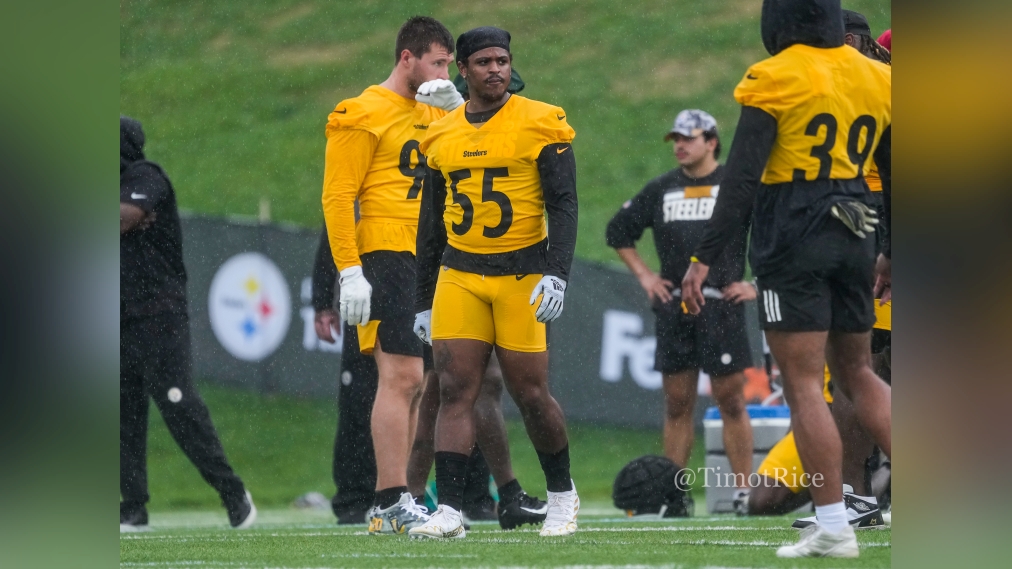 Thus far at Steelers Training Camp in Latrobe, we’ve seen many positives that we can take from the team’s practice sessions that make us feel good about the direction of this team moving forward. One of which is the play of the defense, which hasn’t given the offense much breathing room as I sit here typing this on day three.

One of the intriguing story lines thus far has been defense-related, in the fact that inside linebacker Robert Spillane has found his way into earning first-team reps, routinely subbing in with free agent signee Myles Jack and/or Devin Bush. On Friday, former Steelers outside linebacker Arthur Moats was a guest with 93.7 The Fan’s PM Team w/ Poni & Mueller, and he was asked if this was anything to fret over.

I mean, where there’s smoke, there’s generally fire, right? In regards to Jack, Moats said that was nothing, perhaps the coaches just getting the two acclimated in certain subpackages. He had a whole different response when it came to Bush though.

“Devin Bush and Robert Spillane, I do think that’s legitimate, I think that’s real, that has legs because Devin Bush has opened the door. Not of anything that he did in the OTA period or even anything that he’s done in these first couple of days,” Moats said to Fillipponi and Mueller, according to audio via 93.7 The Fan. “But you’ve opened the door by your play since you’ve been here. When they drafted you, we have a certain level of expectation and unfortunately, for various reasons, he hasn’t lived up to them.”

The Steelers aren’t often a team to jump the gun or rush to do anything, but one thing is certain, and that’s the fact that if they make a trade up to acquire you in the first round, they’re expecting a heavy return on their investment. They got that with Bush his rookie year in 2019, after spending precious draft capital to move up from their original spot at 20 to select Bush at #10. He was a sideline-to-sideline tackler his first year, racking up 109 tackles along with two interceptions. Finally it looked like the team had found a valid replacement for Pro Bowler Ryan Shazier after losing him to a career-ending spine injury.

Then came the ACL injury in 2020. He worked and rehabbed tirelessly to get back onto the field all last offseason, and his work paid off, as he was indeed on the field for last season’s opener at Buffalo. However, he looked far from the same player, as his trademark explosiveness was not there. He routinely looked very tentative, and his read-and-react/play diagnosis skills seemed like they were stuck in the mud.

Moats went on to label Spillane as an overachiever, calling him “very fundamentally sound” and a “cerebral player.” In essence, what he lacks in Bush’s God-given gifts, he makes up for with his brains. However, camp and the preseason, Moats said, is the time for Bush to put some distance between himself and Spillane.

“Who cares about what he’s doing? You gotta start making plays because the sooner Devin [Bush] starts making plays and being more consistent and that, this rotation, this open competition, will be put to rest because at the end of the day, one was a top-10 pick, one is a guy that we viewed as a journeyman,” Moats added, according to audio via 93.7 The Fan.

Bush has admitted in the past there is a lot mentally that goes into it, as he likened it to being bit by a dog. You don’t want to get bit again, so a fear of dogs is natural. The same can be said for knee injuries like this, which quite often require a rehab process beyond nine months. Now a year removed, will we see Bush regain his rookie year form? Thus far in camp has looked promising, as just yesterday he snatched an interception right from the mitts of tight end Zach Gentry, a fellow Michigan alum. However, the team will indeed be looking for a lot more from him this upcoming season if Bush has any hope of a prolonged career in the Steel City, as the team opted against his fifth-year option earlier this offseason.

“There’s a lot more invested in Devin Bush, so they’re gonna want to see him, they’re gonna want him to be successful,” Moats added. “So all he has to do is go out there and start putting that productivity on tape and everything will work out for itself.”