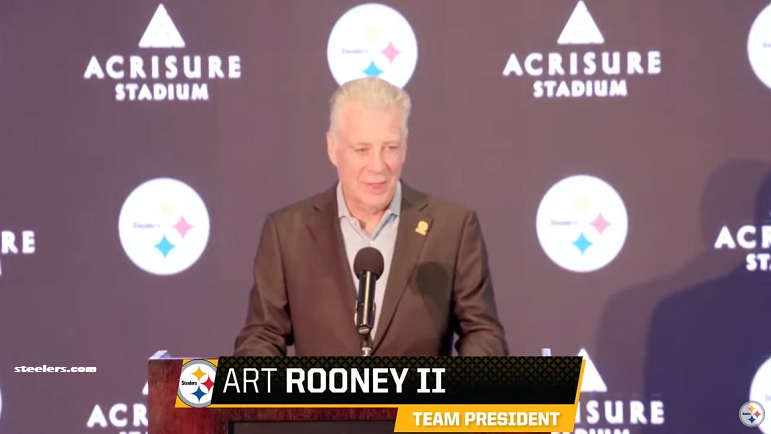 Despite the renaming of Acrisure Stadium, officially announced today in a press conference by Steelers’ President Art Rooney II and Acrisure CEO Greg Williams, fans had one burning question.

What happens to the Heinz ketchup bottles?

Asked about a future partnership with the company and the two big bottles that pour in the red zone, Rooney left the door open for them to remain.

“We appreciate the 20-plus year partnership we’ve had with Heinz and we are optimistic and hopeful we’ll continue to have a sponsorship relationship with them and having those discussions,” he said during the presser, carried by the team’s YouTube channel. “Who knows, the ketchup bottles may be part of that. We’ll see.”

The ketchup bottles have been a staple of Heinz Field’s architecture, “pouring” out each time the Steelers’ offense reached the red zone. Under the new deal with Acrisure, those bottles may be no more. It’ll all depend on the deal hammered out by the Steelers and Kraft Heinz, assuming one occurs at all.

Though it’s impossible to know what will happen, it’s difficult to believe the bottles will stay. Acrisure probably wouldn’t love to see “old” and iconic branding of another company as they attempt to build their brand and presence in Pittsburgh. Perhaps Heinz’s partnership could be the “Heinz Red Zone,” with the bottles staying. It’d be a silver lining to a name change most fans aren’t pleased with. But Acrisure is here to stay, signing a 15-year deal with the team that will carry them through 2036.

Rooney went on to say the Acrisure name will be on the Steelers’ stadium soon, with most signage and branding completed before the season begins. While based out of Michigan, the company’s CEO Greg Williams says he’s a lifelong Steelers’ fan who grew up watching the team in the 70s, rattling off names like Joe Greene, Jack Lambert, and Mel Blount. Hopefully Pittsburgh’s 2022 defense can resemble that level of dominance, boosting an offense bound to experience growing pains throughout the year.