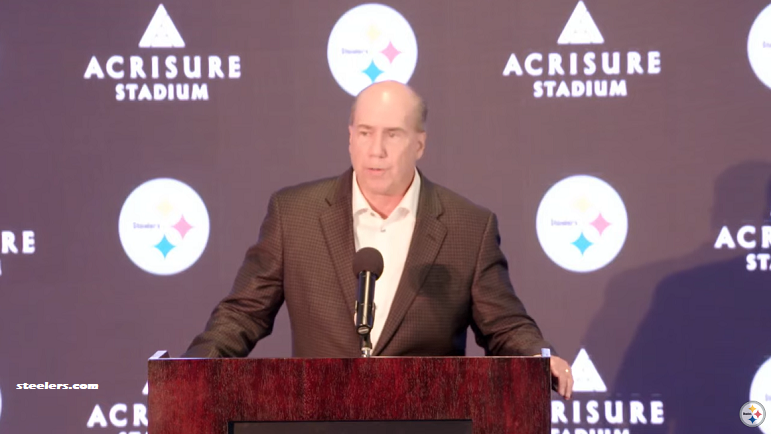 Growing up in the formidable years of the 1960s and 1970s, Acrisure Co-Founder, Chairman and CEO Greg Williams gravitated to the hard-nosed Pittsburgh Steelers on the football field, setting off a lifetime of fandom for the black and gold.

Now, after seeing Acrisure — which operates as a top-10 global insurance broker — grow itts revenue to more than $3.8 billion in just over eight years, Williams finds himself in a bit of a dream scenario with his beloved black and gold. Owner of the naming rights for the Steelers’ home field, which will now be known as Acrisure Stadium for at least the next 15 years after Acrisure and the Steelers reached a reported 15-year, $150 million partnership Monday.

On Tuesday, Williams introduced himself to the assembled Pittsburgh media and politicians at newly-named Acrisure Stadium. Williams — along with Steelers’ owner Art Rooney II — made sure to push the fact that Williams is a long-time Steeler fan in what appeared to be a bit of an effort to at least lessen some of the blow of changing the name of Heinz Field after 20 years.

“This is a bit of a pinch me moment for me,” Williams told the media Tuesday during his opening remarks, according to video via the Steelers’ official YouTube page. “I’ll start where Art [Rooney II] ended. Lifetime Steeler fan; my wife and I have been married 40 years, and in the seventies — because we couldn’t get tickets in Pittsburgh — we’d go to away games. So we’ve been to Cincinnati, we’ve been as far away as San Diego to watch games because there was no such thing as StubHub back in those days.

“All to say that…the Steelers have been something we’ve been close to for, basically, our lifetime, as is the business that we’ve built grew.”

Born in 1961 in Lansing, Michigan, Williams had to endure some down seasons as a fan of the black and gold, but like many his age, once the 1970s hit, it was a blast being a fan of the Steel Curtain, enjoying a run of four Super Bowls in the 1970s featuring the likes of legendary names such as Joe Greene, Jack Lambert, Jack Ham, Mel Blount, L.C. Greenwood and Donnie Shell defensively, not to mention Terry Bradshaw, Franco Harris, Lynn Swann and John Stallworth on offense.

It was the defensive side of the football that drew Williams in though, and it remains that way today, he said to media members Tuesday.

“So you think about the seventies and the age that I was at that time? Not hard to fall in love with the winning that the Steelers did,” Williams said to reporters during Tuesday’s question and answer session at Acrisure Stadium, according to video via the Steelers’ official YouTube page. “It was also the brand of football, the toughness, I mean the grit the defense [had]. I’m…probably one of the rare football fans that like watching defense more, not like watching offense.

“And so you go back to those days…doing a little tour around the stadium, you’d see, the Joe Greenes, the Ernie Holmes, the Dwight Whites, the LC Greenwoods, the Jack Hams, the Jack Lamberts, the Mel Blounts and on and on the list goes, in terms of players that we watched and were fans of.”

The Steelers did a lot of winning in the 70s behind those key players Williams mentioned Tuesday during his introductory press conference. So much winning, in fact, that many of those names he rattled off are in the Pro Football Hall of Fame and are so synonymous with Steelers’ history as the colors of the uniforms.

There’s something deeper there with Williams though, something that’s kept him a fan long after the true glory days of the 70s dynasty, which later led to the mediocrity of the 80s, and then the heartbreak of the 90s and 2000s for the black and gold. He touched on it during Tuesday’s press conference, highlighting the equality of the organization and the respect with which how the Steelers are run, and have been run since the franchise’s inception in 1933.

“It was a combination of the winning, and then as you get older and hopefully a little bit more mature in life, you also learn to appreciate the equality of the organization, and the way the Steelers are run, how respected they are as an organization in terms of how they do things,” Williams added. “I would tell you culturally, there couldn’t be a better alignment in the sense, if you think about our business, we’ve just kept our head down, quietly went about building as great a company we could build. No fanfare, no press, didn’t even brand — probably unwise the way we did it — but didn’t even brand Acrisure…But the history goes back to that and appreciation for all of it brought forward with, again, the quality of the people that are involved with Pittsburgh.”

It’s great to hear that with change as big as the Steelers are undergoing this offseason — from the front office, to the roster, to now the stadium’s naming rights — there’s a cultural alignment in place. That likely largely shaped the Steelers’ search process, aside from the bottom line they could get for a new partnership, pushing the Steelers’ stadium into the future.

It also never hurts to make the case for being a Steelers fan when you get into business with the Rooneys and the black and gold. For what it’s worth, Williams handled himself very well while introducing himself to the city and the fanbase. That’ll go a long way in the end, even if the name of Acrisure Stadium is pretty clunky and doesn’t quite roll off the tongue like Heinz Field.