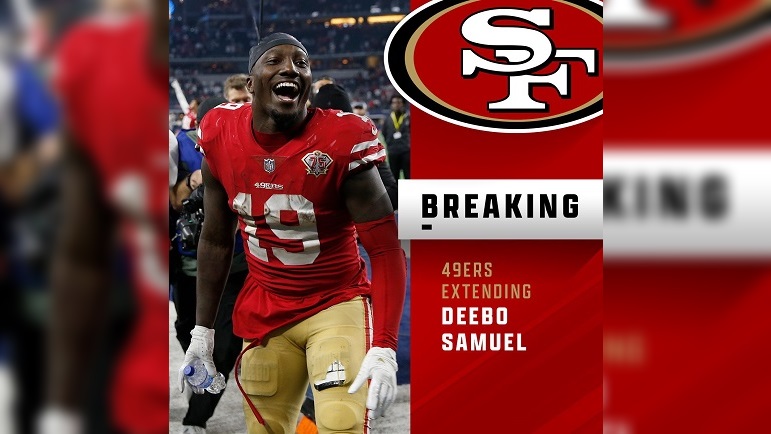 The Pittsburgh Steelers are off on this Sunday but within that, there is some news that indirectly impacts one of their players currently conducting a hold-in. That player is of course wide receiver Diontae Johnson.

According to multiple reports on Sunday, the San Francisco 49ers have now agreed to terms on a three-year contract extension with wide receiver Deebo Samuel, who like Johnson, was conducting a hold-in at the start of training camp. Early reports indicate that the 49ers are signing Samuel to a three-year, $71.55 million contract extension, including $58.1 million guaranteed. The deal reportedly has a max value of $73.5 million. We’ll have to wait to see what the full guaranteed amount is as the $58.1 million number likely includes injury/skill language.

The Samuel deal comes several days after the Seattle Seahawks signed wide receiver D.K. Metcalf to a three-year, $72 million contract extension. According to Pro Football Talk, Metcalf received a $30 million signing bonus and $58.2 million total in guarantees as part of that deal. The fully guaranteed money on that deal is $31 million, however.

The Samuel deal now means that there are 14 wide receivers in the NFL with new money averages of $20 million or more. Johnson is likely wanting to become the 15th such wide receiver to join that $20 million club this summer. It’s yet to be seen if he will and most of the speculation this offseason has been that he ultimately won’t.

Samuel, who was selected in the second round (36th overall) of the 2019 NFL Draft out of South Carolina, has caught 167 passes for 2,598 yards and 10 touchdowns in regular season play to date. He also has registered 81 carries for another 550 yards and 11 touchdowns in the 38 regular season games he has played in since being drafted

As for Johnson, who was selected by the Steelers in the third round (66th overall) of the 2019 NFL Draft out of Toledo, he has caught 254 passes for 2,764 yards and 20 touchdowns in his first three NFL seasons. He has 12 rushed for 109 yards in the 47 regular season games that he has played in to date.

As things stand right now, Johnson is set to become the prize unrestricted free agent wide receiver of 2023 should he not sign an extension this summer or receive the franchise tag from the Steelers prior to the start of the new league year in March. The franchise tag amount for 2023 is currently projected to be $19.985 million by Over the Cap.

Johnson has not participated in the team portions of training camp practices since the Steelers reported to Saint Vincent College in Latrobe early last week. There is no indication that he will stop his camp hold-in on Monday when the team resumes their practices.

A whopping 11 (!) receivers have signed deals worth $20M or more per year this offseason: