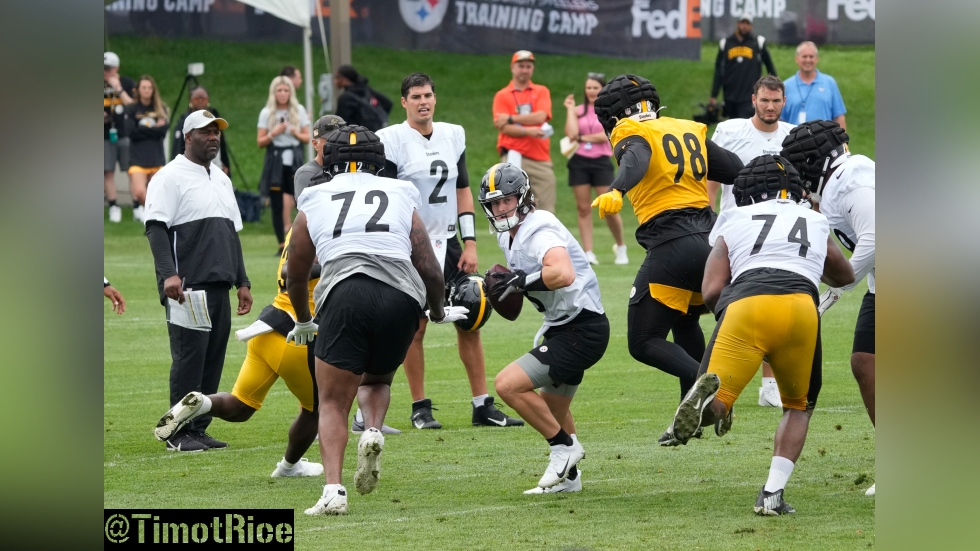 Question: Will Kenny Pickett have to ‘earn’ first-team reps before he actually sees them regularly?

It’s a mystifying notion to many people that a team might draft a quarterback in the first round and not immediately throw every opportunity his way to claim the starting job as soon as possible. The Steelers certainly don’t seem to be doing that with their rookie, 20th-overall selection Kenny Picket, and it has some wondering what the deal is.

Consistent with the procedure throughout the spring, Pickett has been taking third-string snaps behind Mitch Trubisky and Mason Rudolph in the race for the starting quarterback job. Of the three, Rudolph has received the highest reviews for his performance thus far, and has also more evenly split first-team work with Trubisky.

As for Pickett, he has yet to be afforded many ‘quality’ snaps, especially in situational opportunities. He has not, for example, taken a snap in two days’ worth of the ‘seven shots’ drill, where the offense and defense scrimmage for seven plays from the two-yard line, the defense defending the goal line.

It doesn’t seem as though Pickett is going to be handed any greater opportunities without ‘earning’ them. Truth be told, his performance through three days of training camp has been uninspiring, though, due to the early nature of the proceedings, I wouldn’t go so far as to call it disappointing.

He is, after all, a rookie who is figuring out what it’s like to not only be a professional but to be a professional football player at the highest level. And he’s going against a pretty good defense, as well. Even without contact, T.J. Watt, Alex Highsmith, and Cameron Heyward are a lot to deal with.

But, as said, it’s been three days. For all we know, Pickett will take the first four snaps in seven shots on Monday and command a drive or two of first-team reps in team drills. It’s early to make any kind of declarations. All we can do is wonder, and ask questions, as we’re doing here.