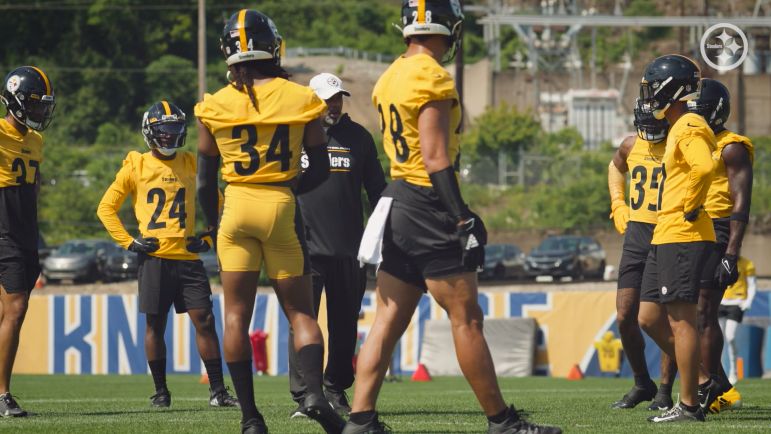 Terrell Edmunds doesn’t seem to think that the starting free safety job is in play. After all, he’s been holding it down there for the past four years. But just in case it isn’t quite as chiseled in stone as he appears to believe, let’s discuss it anyway.

Technically, the Steelers signed two veteran strong safeties who are former starters this offseason, including Karl Joseph, who was on the practice squad last year. The former first-round pick, however, doesn’t even seem to be inside the roster bubble, so I’m not going to throw his name out here.

The other one is, of course, Damontae Kazee, the sixth-year veteran who was signed as a free agent shortly after the draft. Kazee has 49 games of starting experience with 251 tackles to his name and 12 interceptions.

A former fifth-round pick out of San Diego State, Kazee found himself in a bad place this offseason following a DUI arrest while playing with the Dallas Cowboys last season during the team’s bye week. That tanked his market, and he ended up signing for the veteran minimum in Pittsburgh.

But that doesn’t mean he can’t play, and, really, outside of pedigree, his career accomplishments as a starting safety are every bit as notable as are Edmunds’, though it should be noted that Kazee is more of a free safety than strong safety.

Head coach Mike Tomlin is sure to say very early on in training camp, and perhaps frequently, that every job is up for grabs, especially now that Ben Roethlisberger isn’t here anymore, though maybe guys like Cameron Heyward and T.J. Watt can consider their positions relatively safe.

But Edmunds is a guy they were in no rush to sign, and, really, they waited him out on the open market. He fielded legitimate offers from multiple other teams, including offers for multiple years. He ended up signing with the Steelers on a cheap one-year deal worth about $2.5 million or so, a four-year veteran offer that comes with a reduced cap hit for the team.

We’re not talking about somebody the Steelers were afraid to lose. They were very much willing to let him go if the market offered him more than they were willing to pay. Kazee was reportedly one of three safeties—along with Edmunds and Tyrann Mathieu—they had their eye on this offseason. They have two of them. So why should we assume that they won’t be competing?