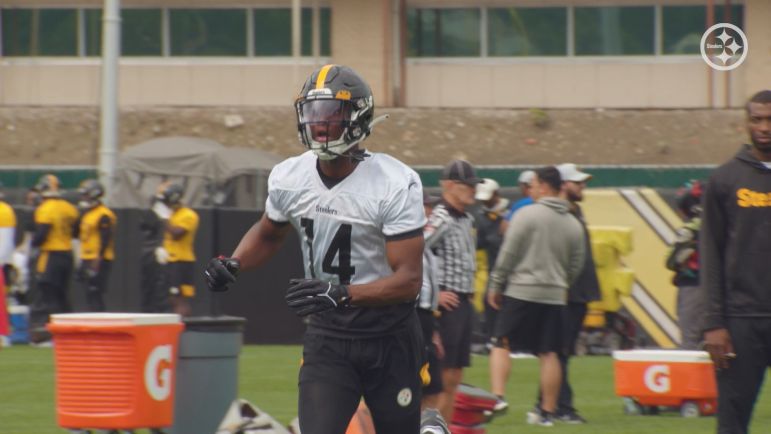 This is the list of candidates I have for the number three wide receiver job behind Diontae Johnson and Chase Claypool entering training camp, trying to be as inclusive as is reasonable, with only Tyler Vaughns and Tyler Snead left off.

But the first name on the list is the prevailing favorite, perhaps especially among fans, and for good reason. George Pickens was a second-round draft pick out of Georgia back in April, and he has first-round size as well as talent. The only reason he fell to the second round was because he was coming back from a torn ACL.

The Steelers also have a history of enabling wide receivers to develop and contribute quickly, though the retirement of Ben Roethlisberger significantly changes that question. As does the fact that neither Johnson nor Claypool are ideally suited to playing in the slot.

That leaves open the possibility that somebody like veteran slot receiver Anthony Miller could open the season as the number three receiver. Miller also worked with Mitch Trubisky, the likely opening-day starting quarterback, while the two were in Chicago.

Rookie Calvin Austin III and veteran return man Gunner Olszewski are also slot-capable players, and Olszewski spent the spring working with the first-team offense. Austin’s great speed and elusiveness could help him contribute earlier than many might think given the talent at the position.

Then there’s Miles Boykin, the former Raven, whom the Steelers claimed off waivers. He was never able to settle into a proper role down in Maryland with Lamar Jackson at quarterback, but perhaps a more traditional offense in Pittsburgh could help him capitalize on his potential. Steven Sims is another veteran who has slot experience, while Cody White was the fifth receiver on the 53-man roster for most of last season.

The betting odds should favor Pickens, who appears to be 100 percent and ready to go, but a veteran opening the season as the primary number three certainly should not be discounted. Miller has a good chance if he makes the team. If he doesn’t, Olszewski is an option.