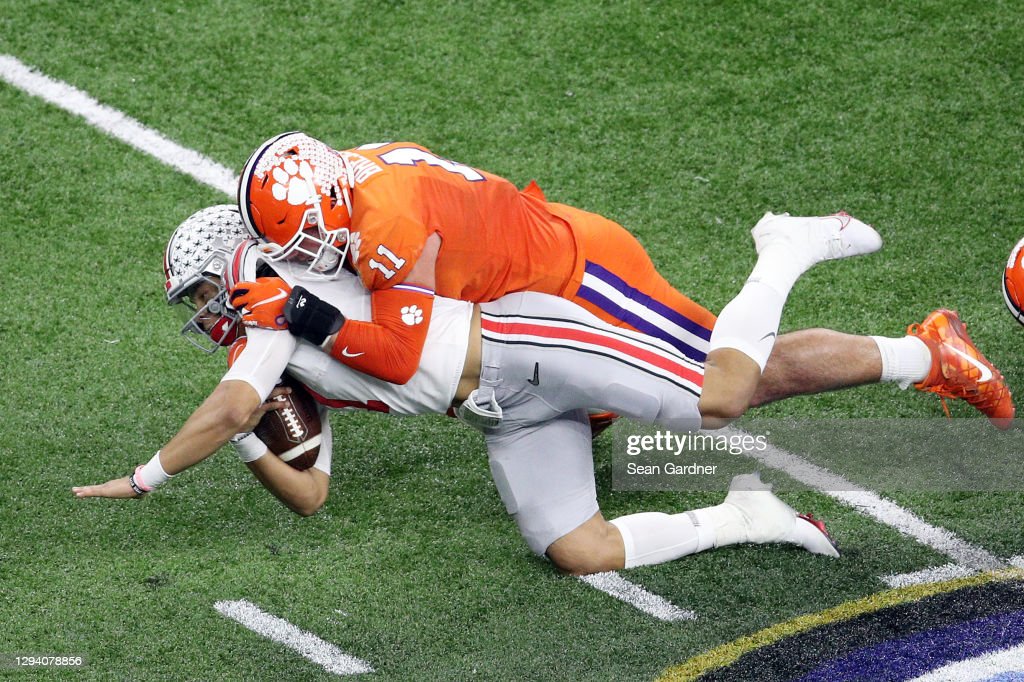 A return of our Summer Scouting Series here at Steelers Depot highlighting as we highlight several 2023 NFL Draft hopefuls that are generating buzz prior to the start of the 2022 CFB season at positions that the Pittsburgh Steelers may have interest in several months from now once the pre-draft process gets underway.

— Freak athlete in terms of size, speed, and explosiveness for the position
— Has played up-and-down the LOS, lining up from the NT to an outside edge rusher
— Impressive play strength to chuck blockers off his frame and shed blocks
— Aggressive tackler that looks to punish the ballcarrier
— Shows good pursuit of the football both as a run defender as well as a pass rusher
— Effective on stunts/twists upfront, working laterally to get into gaps and make plays in the backfield
— Disruptive penetrator that can shoot gaps and work across face of blockers upfront
— Explosive defender that covers a lot of ground quickly
— Can convert speed to power as a rusher
— Young player that still has plenty of room to grow

— Athletic specimen, yet is extremely raw when it comes to technique
— Needs to be more consistent with hand usage to stack and shed blocks
— Tends to panic as a pass rusher when first initial move fails
— Can be disruptive as a pass rusher, but needs to be more productive in terms of finishing the play and getting home to the QB
— Needs to work on taking better angles as a rusher and setting up blockers with moves rather than a straight bull rush
— Pad level gets too high often after the ball is snapped
— Will cede ground versus the run when he pops up, leading to getting washed
— Can stand to improve his balance on the move and engaged
— Coming off a shoulder injury that caused him to miss the majority of the 2021 season

Bryan Bresee has been heavily touted since his high school days, being considered the top prospect of his recruiting class by several recruiting services. He ended up taking his talents to Clemson to follow a long line of recent defensive linemen who starred in college and move onto the pros, hoping to be the next in-line to make such a transition. In just 16 games, it looks like Bresee is well on his way to accomplishing that goal, flashing that talent that made him such a coveted recruit.

When you pop in the tape on Bresee, you see a big, long, fast, and explosive defender that backs up the pedigree. He has the strength at the point of attack to throw defenders off his frame and make plays at the LOS. Here is an example against Virginia where Bresee chucks the blocker aside to blow up the interior of the offensive line.

Even when he’s blocked, Bresee has the strength and effort in pursuit to fight through the block and make plays on the football. Here are a couple of examples of Bresee working across the face of the blocker he’s engaged with, getting in on the action in the backfield to make a play.

Here’s another example of Bresee working right through the block of this Georgia Tech offensive lineman, getting hands inside the blocker’s shoulder then proceeds to rip through the block, getting into the pocket and laying a massive hit on the passer as he releases the football.

While Bresee is naturally strong as a defender, he also has impressive lateral quickness to work up-and-down the LOS on stunts and twists with his fellow DL. You saw an example of this in the first of the two clips above against the Cavaliers but check out these few examples where we see Bresee work laterally to get into the gap and make the play.

Bresee’s pursuit of the football for a man of his size is a testament to his overall athletic profile as a blue-chip prospect coming out of high school. He shows a hot motor, having the speed and acceleration to close ground quickly in pursuit like we see on this play where he is slow getting off the ball on the snap, but still manages to chase the ballcarrier down from behind.

We see that same athleticism on display in flashes as a pass rusher as well with Bresee. He has the movement skills to work around blocks and is dangerous when playing games upfront with other defensive linemen on twists and stunts. Here are two sacks from Bresee where you see his pursuit of the QB off the snap, looping around the edge on the first clip as a 300lb defensive lineman to get home, and works through two blocks in the second clip to slam down Boston College’s QB to the turf on a violent takedown.

On this clip against Notre Dame, we see the potential that Bresee has as a pass rusher from the IDL spot. Sure, he doesn’t manage to get home on the play, but watching him complete the loop outside and manage to cleanly spin off the OT around the corner into the pocket is an impressive feat. Should he improve his bend and ankle flexion, Bresee likely finishes this play with the sack.

When it comes to negatives on Bresee, he needs to improve greatly as a technician to truly excel on a down-to-down basis. He remains inconsistent in terms of his get off on the snap as well as playing with good pad level. He often pops straight up, limiting his ability to anchor in against the run. This, along with inconsistent hand usage, leads to plenty of missed opportunities as a pass rusher as well as ceding ground as a run defender. Here is one good example of the latter against the Irish from last season where Bresee’s pad level betrays him, getting blown off the line, washed away from the play, and buried into the ground by #69 Aaron Banks.

Overall, Bryan Bresee is still a young, raw defensive linemen that needs refinement in his technical development of the game as well as improve hand usage as a pass rusher, but the ceiling is immense. His athletic ability at his size is impressive, having a motor to run down skill position players rather routinely if he’s got the angle. He can move all over the defensive front, having the strength to play inside as well as the athleticism to rush over the tackle. Given the fact that he only has 16 games under his belt, Bresee should expect to take another leap forward as a prospect with another season under his belt in 2022 if he can stay injury-free.

While many in the draft industry have gone as far as to compare Bresee to J.J. Watt coming out of Wisconsin, I’m not willing to go that far yet as Watt was more technically refined and carried more bulk on his frame. Instead, a safer comparison for Bresee as this point in-time would be former Notre Dame DL and current Charger Jerry Tillery. Tillery has nearly identical size, height, and length as Bresee (6’6, 295lb) and is an athletic defensive lineman that can play multiple spots. He has flashed at times as a pass rusher and was a disruptive presence on the DL for the Irish but has struggled to be a consistent run defender due to the same issues Bresee has shown on tape.

Given the fact that Cam Heyward will be one year older come 2023 and the likes of Chris Wormley, Larry Ogunjobi, and Tyson Alualu aren’t under contract past this season, Pittsburgh could prioritize DL early in the 2023 NFL Draft depending on who they bring back and how the development of DeMarvin Leal and Isaiahh Loudermilk goes this season. Given Bresee’s pedigree, athletic ability, and prototypical measurables Pittsburgh looks for in their base 3-4 DEs, he figures to be a good fit and a likely target early in the draft should the team prioritize addressing the DL after the 2022 season.