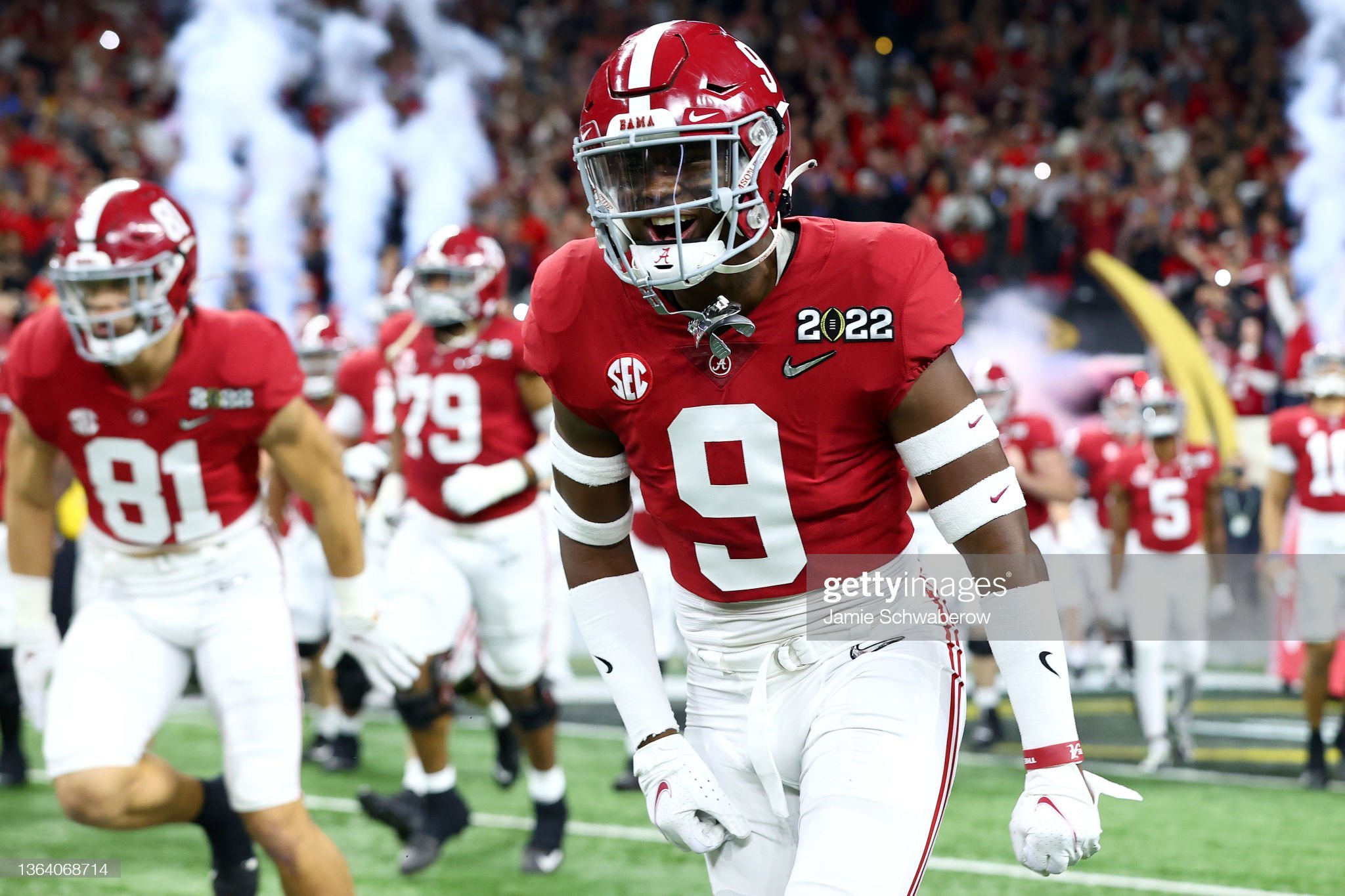 — Has the size and athletic profile you look for in an NFL safety
— Displays good play speed and explosiveness for the position
— Has a long, well-built frame
— Experienced defender that has 31 starts under his belt heading into his senior season
— Has aligned all over the secondary for the Crimson Tide, playing single-high, split zone, in the dime/nickel, and in the box
— Physical defender that can be a heat-seeking missile to the ball
— Can get to the ball quickly when coming downhill or going across the field
— Plays the role of the enforcer of the Alabama secondary, aggressively taking ballcarriers to the ground
— Arrives on the scene at the catch point to either contest the pass or put the pass catcher on the ground immediately
— Does a great job playing the robber role for a defense, jumping the route in attempt to make splash plays
— Can change directions in space to run with receivers attempting to break free from coverage
— Has adequate range as a deep defender, covering half the field toward the sideline to challenge passes
— Opportunistic safety who has three INTs returned for TDs in the last two seasons
— Has shown improvement in his versatility and consistency ever season
— Has experience as a contributor on special teams

— Senior Prospect from Fort Lauderdale, FL
— Attended powerhouse St. Thomas Aquinas High School in Ft. Lauderdale
— Four-star prospect by all major recruiting outlets and selected to the Under Armour All-America Game
— Two-sport athlete who also participated in basketball
— Played in all 13 games with four starts as a true freshman and recorded 30 tackles, two TFLs, one sack, one pass breakup, an interception, and a fumble recovery
— Stated all 12 games he played as a sophomore and notched 66 total tackles (41 solo), three TFLs, four pass breakups, and one interception returned for a TD
— Started 15 games for the Crimson Tide and racked up 85 total stops (50 solo), one TFL, the pass breakups, and three interceptions, taking two of them back for scores.
— Third team All-American & All-SEC First Team in 2021

Jordan Battle of Alabama was regarded as one of the top safety prospects in the nation coming into the season in 2021 but surprised many by deciding to return for his senior season after suffering a heartbreaking loss in the CFP National Championship. When previously watching Battle prior to 2021, I saw a safety more suited for the strong safety/box safety role, being a menacing hitter that comes and lays the boom on receivers over the middle and while in pursuit of the football. You want proof? Check out this nasty hit Battle puts on this Texas A&M WR back in 2020, breaking down in the open field and decleats him on the big collision.

However, there were several instances in his tape where Battle showed a more well-rounded safety prospect than I initially thought. He played single-high, split zone, in the dime/nickel, and in the box for the Tide defense throughout the season, being asked to lead the secondary in terms of communication as well as being the traffic cop on the backend. Watch this play where Battle aligns in the slot against LSU and comes downhill after the QB dumps the ball of in the flat, taking the receiver down before he can get the first down.

Here is another example in the same game where we see Battle’s ability to rally to the football in pursuit. He aligns in a two-high safety look but comes downhill in a robber role, recognizing the quick out route pattern and closes on the receiver in a hurry, planting him into the ground right near the LOS.

When it comes to pass coverage, Battle plays like an opportunistic safety, reading the QB’s eyes and looks for the opportunity to jump the route and make a play on the football. We saw just that in the Tide’s first matchup against the Bulldogs in the SEC Championship Game, motioning backward once the ball is snapped in a two-high safety look, but breaks downhill as the robber on the post pattern over the middle of the field. Battle jumps the route and picks off the pass, angling toward the sideline where he converts the turnover into a touchdown for the Tide.

Pro Football Focus gave Battle an 88.0 overall grade for his performance in 2021, having allowed 474 yards with five picks and eight pass breakups on 1,335 career coverage snaps.

Battle enjoyed similar success as a ballhawk earlier in the season against Mississippi State, picking off two passes in that contest. On his first INT, Battle aligns as a deep safety in a three-high look with the linebacker backed up in coverage, manning the sideline to the bottom of your screen. Battle reads the QB’s eyes in a slight backpedal then breaks on the ball once thrown, covering ground to the sideline as he jumps the route by the receiver and picks off the pass, turning up the sideline with a convoy of blocker as he runs to the end zone. What makes me smile is Battle dropping the shoulder at the end of the play on the QB’s tackle attempt, running the dude over.

With the end zone view of the play, we see how well Battle covers ground, having the length and range to make an impact in the passing game as a free defender roaming the backend of the defense as he makes a play on the ball in the air. This is the skill set you like to see from a starting free safety, but with Battle’s capability of playing both positions, that only adds to his value.

Battle’s second INT comes on this desperation heave to the end zone at the end of the game that he picks off for his second interception of the night. The QB faces a bunch of pressure in a collapsing pocket and chucks it up, giving Battle the perfect opportunity to track it in the air and position himself to come down with the turnover. It may be a “low quality” INT due to the circumstances, but Battle still demonstrates that he has the ball skills and instincts to challenge receivers at the catch point and come down with the ball if in the right position. He has a nose for finding the ball and making a play, which is invaluable in today’s pass-heavy NFL.

Battle isn’t without his faults though as a player, hence why it may have been a good decision to come back for his senior season. While Battle is an extremely physical tackler, he tends to go high at the shoulders rather than at the torso. Watch this play against the Bulldogs where Battle is quick to meet him after the catch, breaking down to square up the receiver and wrap him up in the open field to prevent further YAC. Battle goes up high on his tackle and should drop his strike zone to the torso. However, he runs his legs on contact and swings him down to the ground without giving up additional yardage on the play.

Still, Battle can be his worst enemy when it comes to run support as a tackler, showing at times inconsistent effort and urgency across the field. He also needs to clean up his angles of pursuit to the ball to avoid being out of position when arriving to make the play. We see the latter here against LSU where Battle takes a bad angle to the to the pop pass receiver coming across the formation, failing to cut him off as he runs behind the runner and resorts to leaving his feet to reach out to bring him down. Battle ends up getting called for the horse collar tackle, giving up extra yardage that could have been prevented with a better angle of pursuit.

While Battle can play in the slot and even as a boundary corner at times, he doesn’t trust himself at times when singled up in man coverage. Here we see Battle line up across the receiver at the bottom of your screen and carries him vertically down the middle of the field. He is running in-stride with the receiver but panics and gets grabby as the ball comes to the intended target, falling incomplete. Battle gets away with the play, but that same action will get penalized nearly every time in the pros.

Overall, Jordan Battle is the next Alabama safety looking to make the transition from the college game to the pros. He has shown continual development each season in Tuscaloosa, becoming more of an asset in pass coverage to pair with his physical demeanor as an enforcer against the run. He can be deployed in several different spots in the secondary but can best serve as a split zone safety/strong safety where he can be used close to the LOS in run support while also having the opportunity to cover half of the backend and undercut passes underneath in a robber role or show his range at making plays along the sideline.

When coming up with a pro comparison for Battle, Green Bay Packers safety Adrian Amos comes to mind as a safety that matches Battle’s skillset. Amos is also a well-built safety (6’0, 214lb) that has the athleticism and skillset to play a variety of roles for a secondary, both as a deep safety in coverage as well as a box safety who can stop the run. Both share similar play styles as physical tacklers as well as playmakers who have a knack for challenging passes and jumping routes for picks when the opportunity presents itself.

Amos didn’t get selected until the fifth round of the 2015 NFL Draft, and I would expect Battle to go much higher than that in 2023. He must clean up his tackling and angles of pursuit to the ball, but as one of the better safety prospects in last year’s draft class, there’s a distinct possibility that he could put himself in conversation to be the first one off the board with a good performance this fall. Terrell Edmunds was brought back on a cheap one-year this offseason, making it seem as if Pittsburgh isn’t sold on his long-term future with the team. Should Pittsburgh not re-sign him this offseason, Battle could be an ideal fit next the Minkah Fitzpatrick for the Pittsburgh Steelers.