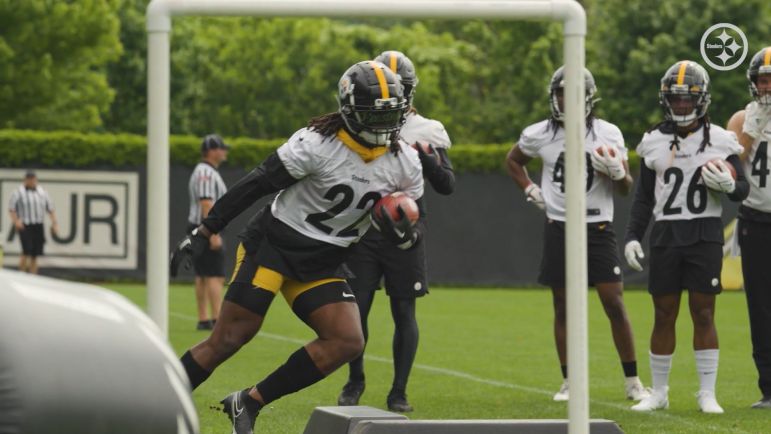 Reasoning: The second-year running back certainly looks to be primed for a big sophomore season, physically appearing to be in fantastic shape and with reports from sprint drills being universally positive. Harris is also stepping up into a leadership role within the locker room.

The Steelers knew that they were getting more than just a cog in the machine when they used their first-round draft pick in 2021 on running back Najee Harris out of Alabama. Not only is he a complete back with an enviable skill set, he is also the sort of character that teams need in locker rooms to galvanize the troops.

Harris hasn’t even considered for a second hiding the fact that he expects to be a leader on this team. He’s been talking about it, sometimes even volunteering it without prompting, since going back to the second half of last season, and it’s been his favorite topic over the past six months.

But leading by example never hurts, and he is priming himself to do just that. He looks to be in phenomenal shape based on all of the reports that we have gotten, which of course include seeing him in pictures and videos.

Beyond the purely visual, all of the observers at OTAs and minicamp couldn’t help but comment on how good Harris was looking throughout all of the drills. And it doesn’t hurt that he endears himself to the old school fans.

Harris is probably one of the few running backs who really looks forward to the opportunity to practice in pads, because that means that the hitting can start. He wants to be hit—and he wants to be able to be hit.

He also talked about his desire to be on the field all the time, and how he was basically trying to negotiate with the coaching staff to stay on the field more as they tried to keep him on the field less to save him from himself and give others at the position an opportunity to contribute.

So there you have it, a fine physical specimen at running back who is a leader and a bruiser who relishes contact and wants to stay on the field. And he’s not afraid to push back against the media. No wonder people like him.