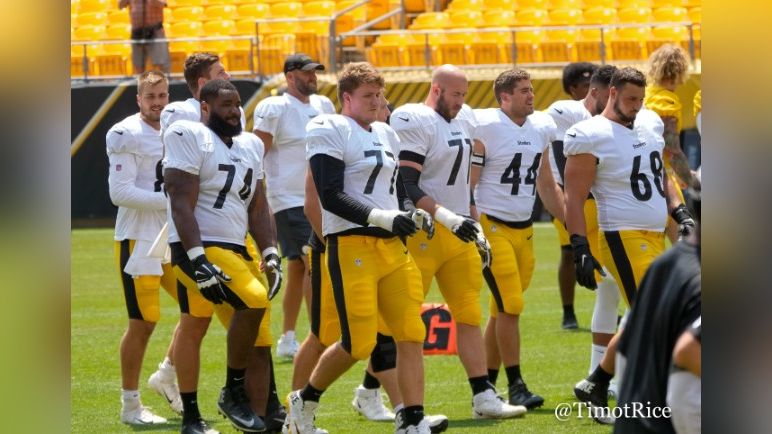 Welcome to Day One of Pittsburgh Steelers’ training camp. The day has finally come. It’s the first of eighteen summer practices and we’ll be in attendance for all of them. Today is the first step in a long season and it should be taken with that in mind. The team won’t even be in pads until the fourth day of camp – the first three are in shells. Generally speaking, I use the first couple days less about evaluation, though there’s always an element of that, and more about pecking order and where players are running and aligning.

That said, here’s what I’ll be looking for on this debut day back at SVC.

We are thrilled to again have Len Test and Touring Plans as a yearly sponsor of Steelers Depot’s training camp coverage. They’ve been a long-time sponsor of the site and our camp notes. You can use their trip planner tool to “show you the least crowded park to visit every day, customized touring plans for visiting Disney’s best rides, honest restaurant reviews, how to save on Disney tickets, the best hotel rooms to ask for, and so much more.”

If you’re planning a trip to Disney, this is the team you want to work with. Reach out to them via their website at the link here.

— One of the biggest obstacles the Steelers will have to manage this camp will be the quarterback reps. Presumably, Mitch Trubisky will open as the #1, Mason Rudolph as the #2, Kenny Pickett as the #3, and Chris Oladokun as the #4. But I’m more interested in the number of reps each guy gets. Oladokun could get shut out on some days. How Rudolph and Pickett split things will be interesting, especially in situational football like Seven Shots and two-minute drills. That’s where I’ll start the QB discussion. Reps, situational work, and then performance.

— When it comes to Najee Harris’ summer, there might not be much to talk about. Expecting him to have a quiet couple of weeks of fairly limited work. No need to risk injury and wear and tear when he’s already proven what he can do. He’ll still practice but expect his work to be ramped down to a year ago.

— Harris’ reduced workload will create serious opportunity for the others in the room. Benny Snell could see a fair amount of work, even if he’s a pretty known player at this stage of his career. Others could really use the work: Anthony McFarland and the two rookies, Jaylen Warren and Mataeo Durant. We’ll see if Matt Canada will run any Pony/two running back formations as the Steelers teased last year and then never showed during the regular season. If they do, that’d be extra reps for McFarland. Durant will have to show his chops in pass pro and some sort of yards after contact ability, he can’t win on speed alone, while Warren will have to show he can do more than just be a runner.

— We’ll see how much of a fullback Canada uses in this year’s version of the Steelers’ offense and how that could impact Derek Watt’s role. Also keeping a close eye on how Connor Heyward is deployed. Tight end versus H-Back versus fullback versus whatever else they decide to do.

— Pat Freiermuth already feels like a seasoned veteran but he’s still just a sophomore and heading into his first season as the Day One starter. I’m excited to see his growth and potential and may much better he could look after an offseason. He needs to show improvement as an in-line blocker so that’ll be the #1 thing I’ll be looking for.

— Zach Gentry needs to show the opposite. He made big strides as a blocker last year but could stand to make more plays as a receiver. Over 13 team practices last year, he caught just eight passes, though at least two of them found the end zone. More receiving production this camp would be ideal.

— Connor Heyward may be penciled in as the #3 TE but his spot isn’t written in pen. Kevin Rader is a good blocker and special teamer and can’t be counted out. Jace Sternberger might be on his last NFL chance, a former third round pick of the Green Bay Packers who did little with the team. He’ll have to block if he wants any chance to compete.

— Big one here. First, a lay of the land of the three lines: first, second, and third team. Here’s my best guess as to how they’ll look left to right.

The third-team line was difficult to judge, especially at center. Chris Owens played there in college but told me he primarily worked guard during OTAs. But none of the other third-teamers have center experience, unless Gilliam is shifting there.

Where players start matters only to a certain degree, though those stuck on third team see a big reduction in reps compared to second team, but it’s good to know where the group begins so we can note changes later on in the summer.

— This unit has a new offensive line coach in Pat Meyer. He’ll have his own stamp and should preach an aggressive style of play, especially in pass protection. We’ll see if he introduces near drills and try to get a feel for the run scheme they’ll employ. I don’t have a great sense of that yet.

— Of course, plenty of focus on the draft picks, second rounder George Pickens and fourth rounder Calvin Austin III. Both could be facing a bit of a learning curve so we’ll get an idea of how they move and how they start their careers off. Both should look good early. They’re each impressive athletes who move well in space before the pads come on.

— Who is getting work in the slot? One of my top questions heading into camp. The job is wide open. Austin? Anthony Miller? Chase Claypool? Some combination, all of the above? Want to see who is getting first team reps to kick things off. Without JuJu Smith-Schuster, that position is less defined.

— How does the back of the pack look? Miles Boykin fighting as a #5/6. He should look good early a la Justin Hunter, a height/weight/speed type who better play well in these limited-contact settings. And could any large-unknowns emerge? Keep an eye on shifty slot receiver Tyler Snead, who should be in the return lines, too.

– A group that certainly needs to play better than a year ago. We’ll check on the health status of a couple guys. Tyson Alualu, it’ll be great to see him again. He’s cleared to practice but we’ll see if Pittsburgh limits his reps at all given his age. He’s not one who took vet days off in the past and obviously, I wouldn’t expect him to get one on the very first day in a shells practice. But something to watch throughout the summer. We’ll also see how the team uses Larry Ogunjobi coming off his foot injury that nixed a mega-deal with the Chicago Bears..

Who are the three down linemen in the team’s base defense? We know two of them will be Alualu at NT and Cam Heyward at RDE. What about LDE? Chris Wormley is my best but we’ll see how the lines look.

— It’s a logjam of names at EDGE behind TJ Watt and Alex Highsmith. Pittsburgh may want to reduce some of Watt’s reps this summer to keep him fresh and give other, more unproven players a look. And there’s lots of them. Genard Avery (new to Pittsburgh) and two rookies in Tyree Johnson and T.D. Moultry. Derrek Tuszka is trying to stay on this roster while Tuzar Skipper is hoping third time’s the charm. He better be active during the special teams’ sessions.

— The inside linebacker battle for the #4/#5 spots will be some of the most intense fights of the summer. Four guys competing for two spots (I’m putting Robert Spillane as the #3 until proven wrong): Marcus Allen, Buddy Johnson, Ulysees Gilbert III, and Mark Robinson. Allen is inside-looking-out while the other three names are squarely on the bubble. We don’t know much about Johnson’s game one year in. With just one year of experience at the position, Robinson will probably look as raw as anyone. He needs to do well in the run-game team sessions.

— We know the Steelers’ top three corners. But we don’t know the base grouping and the nickel order. Cam Sutton, Ahkello Witherspoon, and Levi Wallace are the first three off the bench but I’m not quite sure who the top two are and who will play the slot in nickel. To the latter, Sutton makes the most sense in the slot but Levi Wallace may see looks there, too.

— The secondary gets jumbled up with the likes of Arthur Maulet, Tre Norwood, and Damontae Kazee having similar skillsets and roles. I don’t see all three of those guys making the 53 so something’s gotta give.

— James Pierre is very much on the bubble and needs to have a good camp. Is this the year Justin Layne gets pushed off? He’s developed into a good gunner and has kept his spot thanks to his special teams impact.

— A little less here to discuss though there’s overlap with Norwood and Kazee potentially seeing time in the back end. Donovan Stiner is one of my top camp sleepers. His path to the 53 will be difficult but he should play faster in Year Two. We’ll see if Terrell Edmunds is getting all the first-team reps or if there’s any sort of competition to be had there. Edmunds remains the heavy favorite to start opposite Minkah Fitzpatrick.

— Big camp coming for Pressley Harvin. He’s gotta shine or his job could be threatened by an outside free agent. His job is not secure. Chris Boswell is a lock but the storyline here will be a likely new contract that’ll make him the league’s highest-paid kicker. And Christian Kuntz…keep doing your thing. Who will be the backup long snapper. John Leglue? Someone else? Stay tuned.