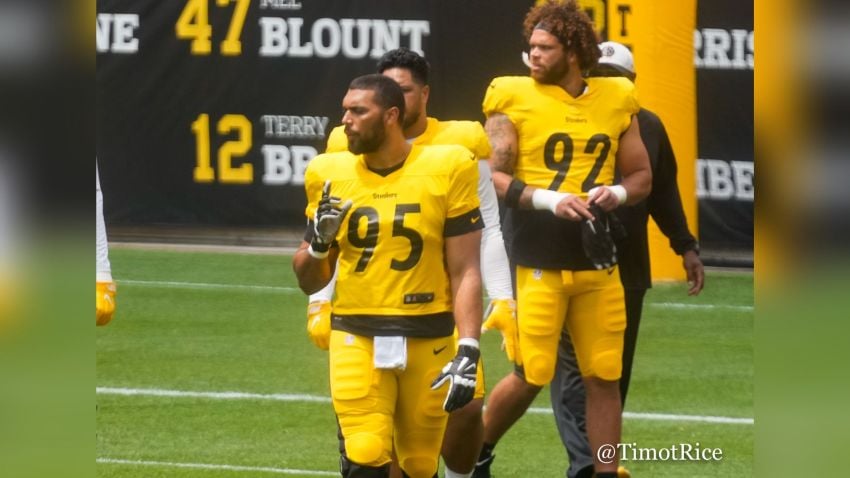 Question: Which defensive linemen are most at risk of not making the 53-man roster this year?

For the purposes of this conversation, we are going to limit the discussion to only players who have never spent time on the Steelers’ practice squad, and/or have always had a roster spot during their tenure in Pittsburgh. That’s going to exclude, for example, Henry Mondeaux, even though he’s spent a lot of time on the roster.

So the defensive linemen we’re discussing are: Cameron Heyward, Tyson Alualu, Larry Ogunjobi, Chris Wormley, Montravius Adams, Isaiahh Loudermilk, DeMarvin Leal, and Carlos Davis. Ogunjobi was just signed as a veteran free agent, of course. Leal is a rookie. Adams was picked up off of the Saints’ practice squad last year, but has always been on the Steelers’ 53, as has Davis when healthy.

Of these eight, at least one, if not two, will fail to make the 53-man roster. Davis is probably the most realistic answer as to who has the steepest hill to climb in terms of preserving his roster spot, but we can’t assume the Steelers are going to keep seven.

If they keep six, who misses the cut? Heyward, Alualu, and Ogunjobi, plus the rookie Leal, are definitely safe. That much we know. Of the other three, you can at least have the conversation. Wormley started last year, but now they have Ogunjobi, plus Loudermilk with a year under his belt and Leal coming in.

There may be some excitement over what Loudermilk can develop into if given the opportunity to mature, but that doesn’t guarantee that they have room for him. Yet if they are comfortable with somebody else as the number two nose tackle, Adams can quickly become expendable, too.