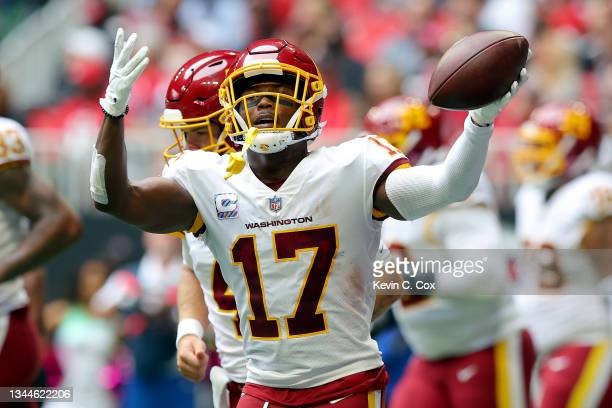 A red hot wide receiver market turned the dial up another notch Tuesday with Washington Commanders WR Terry McLaurin signing a massive three-year extension worth “up to” $71 million according to multiple reports.

According to NFL Network’s Ian Rapoport, the deal averages out to over $23 million per season in new money.

Sources: The #Commanders and star WR Terry McLaurin have agreed to terms on a 3-year deal worth $23.3M per year new money. Another WR cashes in.

That $23.3 million figure makes him the seventh-highest paid receiver in football.

Rapoport later tweeted out more details of the deal.

More details:
Total guarantee: $53.154M
Full guarantee at signing: $34.6M
Another $12.5M guaranteed in March of 2023.
Signing bonus: $28M
Roster bonuses at the start of each league year.
$250K escalators each year except for the last year based on Pro Bowl nods. https://t.co/lBLJVrpX2d

McLaurin was fully expected to break the $20 million average yearly value mark, but $23.3 million is a bigger number than expected. It’s one of several mega-money deals handed out to receivers since the offseason began. It started with Mike Williams and Christian Kirk and was followed by Davante Adams, Tyreek Hill, and Cooper Kupp. Now add McLaurin to that list. Seahawks’ receiver D.K. Metcalf is also looking for a new deal, and he could top McLaurin’s figure, raising the bar all the more.

All this means is it’s that much harder to re-sign Diontae Johnson, angling for a long-term deal with the team. It was pretty clear Johnson was going to net $20+ million, but with McLaurin’s deal, a player with a similar career arc as Johnson, that price might have just gone up. And every increase makes it more difficult to see the Steelers striking a deal with him this summer. We had previously written how Johnson’s camp was likely looking towards how McLaurin’s situation played out.

Getting tougher and tougher to imagine the Steelers signing Diontae Johnson to an extension this offseason. #Steelers #NFL https://t.co/Xv72JuWTgd

A deal is still possible, and new GM Omar Khan is on record saying he wants to retain good players. But Pittsburgh hasn’t openly committed to a long-term deal the way they did with T.J. Watt and Minkah Fitzpatrick. The odds of a Johnson contract might be a coin flip, and with today’s news, they may have shifted closer to an extension not taking place.

One extension likely to occur this summer is a deal with kicker Chris Boswell. But one with Johnson could go down to the wire and he 2022 may be his final season in Pittsburgh. After this year, the Steelers will still have the option to franchise tag him if they want to keep him one more year.