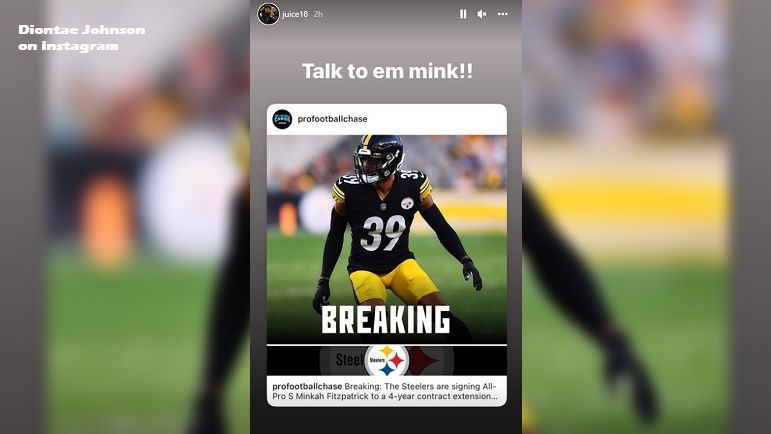 The Pittsburgh Steelers got safety Minkah Fitzpatrick signed to his expected lucrative extension on Wednesday, and if you look at the calendar, you will see it is only June 15. The fact that Fitzpatrick’s deal got done so early in the offseason is a bit of a surprise when it comes to team history as we are usually waiting well past the start of training camp for big deals for non-quarterbacks to get completed. With that, major kudos to new Steelers general manager Omar Khan as he got Fitzpatrick to the proverbial altar long before the Cincinnati Bengals and Los Angeles Chargers got their top safeties, Jessie Bates III and Derwin James, respectively, extended to top-of-the-position market deals. So, with Fitzpatrick now signed, sealed, and delivered, what might this ultimately mean for Steelers wide receiver Diontae Johnson and the likelihood of him getting a new deal by Week 1 of the regular season?

Well, let’s start with a Wednesday report from Aditi Kinkwalbali. She stated on Twitter that the Steelers have yet to offer Johnson any sort of contract offer. If that is indeed true, it wouldn’t be a shock. After all, you would have needed to have been in a deep sleep for the last several months to not know that an extension for Fitzpatrick was the team’s highest priority this offseason. Remember, it’s only June 13, not August 30.

And Diontae Johnson – the #Steelers WR1 who Ben Roethlisberger called “a phenomenal football player” and “an incredible talent” – has not yet been offered a contract. At all.
(PS I’d venture to say Ben Roethlisberger knows a gamebreaking WR from one who’s not…) https://t.co/xYxzwKj2Vq

Yes, the Steelers are expected to also get kicker Chris Boswell signed to an extension later in the offseason as well, but that deal, which could result in the Rice product becoming the NFL’s new highest-paid kicker, shouldn’t be hard to put together at all. With Boswell, it’s not really a matter of if, but when. A new deal for Boswell might also slightly decrease his 2022 cap charge as well. If anything, his 2022 cap charge would likely stay the same, not increase.

A byproduct of Fitzpatrick’s new deal should be a decrease in his 2022 salary cap charge. At the very least, that decrease figures to be around $3 million, give or take. We’ll know very quickly what his new 2022 cap number will be. Whatever that cap savings turns out to be, it will add to the $20,325,877 the team is currently under the cap as of the time of this post.

Now, a good chunk of that more than $20 million in available salary cap space is already essentially spoken for and I showed that in my most recent breakdown. Even so, the roughly estimated $3.5 million in projected available salary cap space the team could still spend this offseason, when combined with whatever cap savings that the new Fitzpatrick deal provides, should be able to cover an increased 2022 cap charge for Johnson, assuming they ultimately sign him to an extension. Johnson’s cap charge is currently $2.79 million. A new deal for him would produce a 2022 cap charge of no greater than $7.79 million.

Obviously, the Steelers can go to outside linebacker T.J. Watt and restructure his contract between now and Week 1 to free up a ton more salary cap space. That said, I’m willing to bet that Khan’s hope is to leave Watt’s contract alone this summer. Just let it be known that there is more than enough salary cap space available for Khan to do pretty much whatever he wants to do between now and Week 1.

So, back to Johnson. When it comes to possibly extending him this summer, it won’t be about salary cap space. As is customary, it will be all about new money average, guaranteed money, and cash flow in a possible new deal. Based on the wide receiver market right now, it’s hard to imagine Johnson being willing to settle for less than a $20 million per year new money average. Additionally, Johnson will likely be looking for at least $40 million guaranteed. To put that into instant perspective, Fitzpatrick’s new new money average is reportedly $18.4 million with $36 million guaranteed.

So, that’s your look ahead at Johnson and his summer contract situation with Fitzpatrick’s deal now done. The Steelers can certainly afford to sign Johnson to a lucrative extension from several angles; the only question moving forward is, will they? Khan and the Steelers effectively have 88 days to decide, and that’s a long time when it comes to the offseason calendar.