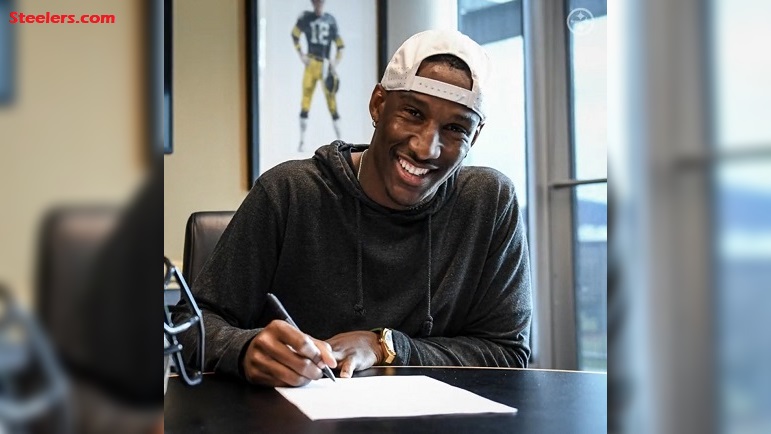 New Steelers CB Levi Wallace was the latest player to join Arthur Moats and Wes Uhler on Steelers Nation Radio Wednesday afternoon to speak about several topics including his transition from Buffalo, learning a new defense, and playing with former Alabama teammate Minkah Fitzpatrick in the secondary.

When asked why exactly Wallace chose Pittsburgh in free agency, Wallace said it was a lot of factors coming together that culminated in his decision to rep the Black and Gold in 2022.

“I played Pittsburgh a couple times already,” Wallace started with his response. “But yeah, just the defense the Steelers have always had since I’ve been playing. You can just tell the comradery in the city and how they just back their teams.”

Wallace prides himself and his ascension from humble beginnings, starting out as a walk-on at the University of Alabama where he eventually won a starting job at CB, contributing on HC Nick Saban’s revered Crimson Tide defense. From there, he would go on to be undrafted and signed with the Buffalo Bills in 2018, working his way into the starting lineup there where he would face the Pittsburgh Steelers three straight seasons, intercepting a pass against them back in 2020.

Wallace is accustomed to playing on talented defensive units back at Alabama and Buffalo and hopefully now in Pittsburgh. Also, he is used to playing for a passionate fan base as he references the support that Steelers Nation has for its players in the city of Pittsburgh. Coming from Buffalo where he got to experience Bills Mafia and Alabama where SEC Football remains king of all of college football, the passion a city has for the team and the tradition is something that was a key factor that Wallace considered when making his FA decision.

Parents have a funny way of skewing children and their direction in life. I had a similar experience who my father growing up a Steelers fan back in the 70s and basically threatening me that I had to become a Steelers fan or that he would disown me. While that may come off as a little harsh, I am happy that it happened that way as I got to experience two Super Bowl Championships and landed a job here at Steelers Depot watching and covering my childhood team for a living.

Wallace now shares a similar story, growing up having the Pittsburgh Steelers likely constantly on television when they played and had his mother take him to a game in-person to watch them play. Matthew Marczi of Steelers Depot highlighted in a post right after the Wallace signing that he was on the fence in regard to signing with Pittsburgh or returning to Buffalo during free agency, but states that his black and gold shorts he had on were a sign that he should sign with the Pittsburgh after having his agent suggested that he should go there.

Surely it was more than just the color of his shorts that prompted Wallace to make the move from Buffalo to Pittsburgh, as evidenced in this interview where he mentions the history of defensive play, the culture, and the fandom growing up all as key factors that played a role in his decision to come to Western Pennsylvania. His addition to the defense should help shore up a unit that had its fair share of ups and downs last season, hopefully bringing back to a top-tier unit in the league like it had been in years prior.

When it comes to the culture, it appears as if Wallace has already been welcomed with open arms by teammates and coaches alike. When it comes to the fans, we’re only a couple short months away from seeing Wallace don the Black and Gold in Heinz Field like he may have envisioned growing up as a child in a house of dedicated Steelers fans.