The Pittsburgh Steelers now have safety Minkah Fitzpatrick signed to a long-term extension that results in his being the highest-paid player in the NFL at his position. On the heels of that signing, a few early details related to Fitzpatrick’s extension have now surfaced thanks to Field Yates of ESPN. Assuming those early details are correct, below is a projected look at the team’s salary cap situation as we sit here on Thursday.

As Yates reported on Thursday, Fitzpatrick’s extension should result in the safety having a new 2022 salary cap charge of $8,124,235. That is a decrease of $2,487,765 from what it was originally scheduled to be. If the cap numbers and savings listed by Yates are correct, the team would then be $22,813,642 under the cap, pending the signing of first-round draft pick Kenny Pickett. There also could still be a small injury settlement charge on the way as well.

With the additional cap space provided as a result if the Fitzpatrick extension, I have the Steelers projected at now having $5,881,557 in effective salary cap space that they can use, barring them restructuring the contracts of either outside linebacker T.J. Watt or defensive tackle Cameron Heyward. That $5,881,557 projected number takes into account several expected forthcoming and predicable costs the team will have prior to Week 1 of the regular season. Yes, Pickett’s rookie deal is projected in those numbers, by the way.

Like Fitzpatrick, the Steelers are very likely to sign kicker Chris Boswell to an extension prior to Week 1. Such an extension would likely slightly decrease Boswell’s 2022 cap charge. If anything, his cap charge would remain the same as it is now.

That $5,881,557-plus in projected effective salary cap space could obviously be used in several ways. One of those ways might be to sign wide receiver Diontae Johnson to a contract extension, as his current 2022 salary cap charge of $3,073,357 would surely increase as a byproduct of a lucrative extension. While it won’t make many happy reading it, a Johnson contract extension this summer is very plausible based on where the team sits right now in the middle of June. It could likely get done without the team needing to restructure the contracts of either Watt or Heyward.

Should the team ultimately decide to not extend the contract of Johnson, there would be plenty of salary cap space available to add another veteran free agent or two to modest deals.

In the end, and as I have stated several times so far this offseason, the Steelers’ cap situation is in a good place overall, and thus the team could still go in several different directions. 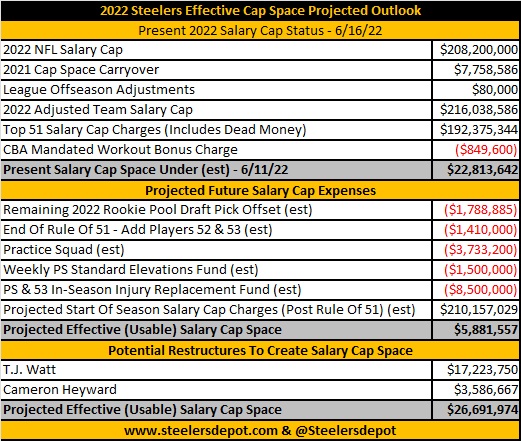