The Pittsburgh Steelers wrapped up their 2022 mandatory minicamp on Thursday, and they did so with just 89 players on their active roster. On Friday, the team waived defensive back Isaiah Johnson from the Reserve/Injured list as well. That move came on the heels of the team signing wide receiver Calvin Austin III, drafted in the fourth round this year, to his four-year rookie contract. With there now being a break in the action, now is a perfect time to update the team’s salary cap situation.

Saturday morning, the NFLPA has the Steelers at $20,325,877 under the cap, and that includes the contract of Austin being accounted for. It also accounts for the signing of outside linebacker Tuzar Skipper ahead of mandatory minicamp getting away. The NFLPA still has the Steelers with 90 players under contract, and that’s because the waiving of Johnson from the Reserve/Injured list has not yet been processed. Johnson was not given an injury settlement as part of his waiving.

The NFLPA has still yet to account for the small injury settlement that cornerback Bryce Watts reportedly received when he was waived from the Reserve/Injured list a few weeks ago. We still do not know what that amount is, but it will be miniscule.

As you can see in the attached graphic below, the Steelers are $20,325,877 under the cap, pending the signing of Pickett and the small injury settlement amount hitting. In reality, the Steelers are roughly $3,393,792 under the cap after accounting for projected expenses the team will have between now and Week 1 of the regular season. Those projected expenses include Pickett’s contract, a full practice squad being signed, a 52nd and 53rd player added, as well as budgeted in-season cap space for injuries and practice squad elevations.

The Steelers are very likely to sign safety Minkah Fitzpatrick and kicker Chris Boswell to contract extensions prior to Week 1 of the regular season. Assuming that happens, the cap charges for both players are likely to decrease a little, which would in turn free up more space. The team could also wind up signing wide receiver Diontae Johnson to a contract extension later this summer as well. If they do, however, Johnson’s 2022 salary cap charge is sure to increase quite a bit.

On the surface, the Steelers’ 2022 salary cap situation appears to be just fine,and it’s beginning to look more and more like the team won’t need to restructure the contract of outside linebacker T.J. Watt this offseason. The ability to free up a ton more cap space does exist, however, should the team need it. That is reflected on the bottom of the graphic below. 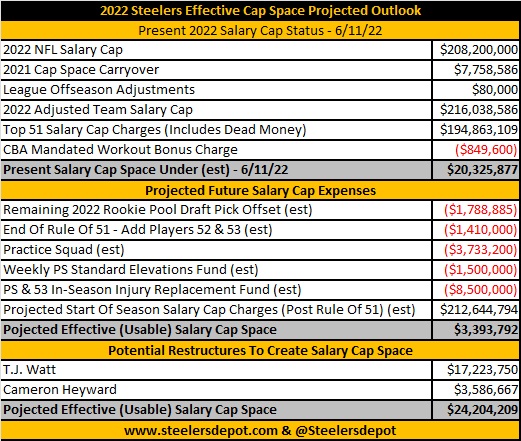