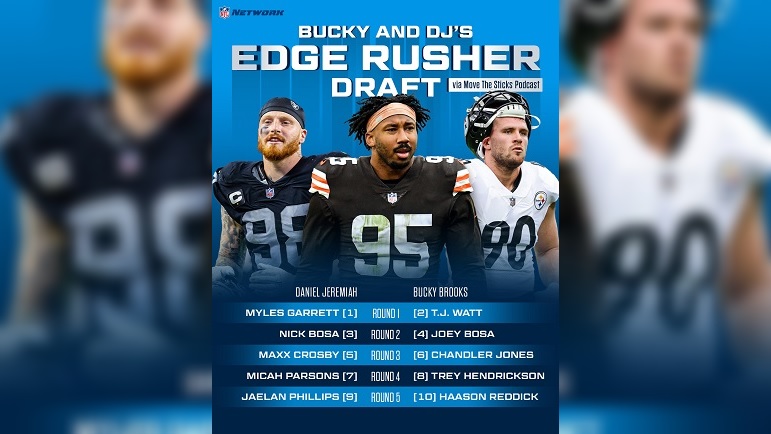 Despite a 22.5 sack season and Defensive Player of the Year honors, T.J. Watt still wasn’t the first EDGE rusher taken in a draft of the position between NFL Network’s Bucky Brooks and Daniel Jeremiah on the Move the Sticks podcast.

Going first was another AFC North pass rusher in Myles Garrett who Jeremiah picked over Watt. Here’s what he had to say as to why he took Garrett over the DPOY.

“Myles Garrett is the prototype. You know, the size, the length, the get off, the bend, the power. He has everything. He’s out there and healthy and on the field, he’s somebody that completely take over and dominate football games.”

Garrett didn’t put up Watt-like numbers last year, finishing with *just* 16 sacks in 17 games. Across the board, his numbers were down compared to Watt and though Garrett is double-teamed at a slightly higher rate, Watt sees plenty of attention, too. On paper, it seems like Watt should be the no-brainer pick.

Taking off my black and gold colored glasses for a moment, I can at least understand why Jeremiah would take Garrett first. Watt is an underrated athlete who is too often thought as this tough scrapper, but Garrett is a physical freak on another level. He’s bigger, longer, and a more explosive athlete with more “tools” than Watt has. Still, it seems like Watt will have to put up a 30-sack season in order to reach the top spot on this list.

“When we think about the game and we always talk about closers and can you close the game out and can you make the play when the play is there to be made when you need the play to be made. T.J. Watt has proven that.”

A little wordy of a way to talk about him, but the stats don’t lie. As we wrote a week ago, no player had more sacks in the fourth quarter/overtime than Watt’s eight of them a year ago.

For Watt, it was a big step up after recording just 1.5 such sacks in 2020. He came up big time and time again last year, far more than Garrett, who had just 3.5 sacks late in the game.

Brooks went on to discuss the traits that make Watt a great pass rusher.

“You just see the energy, the relentlessness, all of that effort. He just is great. Plus with the technique. So I’m gonna take him. He is my top pass rusher. That’s what I’m taking.”

Watt certainly is all of those things. But Brooks falls into the trap most of, forgetting how great of an athlete he is too. Watt posted a remarkable 9.92 RAS score coming out of the 2017 NFL Draft, numbers that included a 37-inch vertical, 10’8″ broad, and 6.79 three-cone time. Garrett’s score was still better, an almost unbeatable 9.99, but Watt is still in an elite tier.

The way fans will react to these rankings depends on what team they’re rooting for. Browns fans will argue Garrett, Steelers fans will do the same for Watt. They’re two of the best in football and are paid as such with their careers linked for the next ten years.