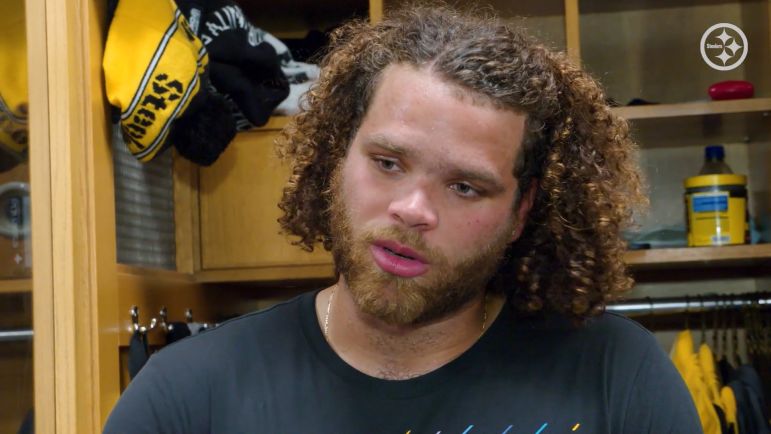 The Pittsburgh Steelers recently learned that they would not have the services of Stephon Tuitt this season, one of their most talented players on the defensive side of the football. While not a surprise, his absence will force the team to rely upon others to step up, and one individual the defense is looking toward is 2021 fifth-round draft pick Isaiahh Loudermilk, from whom the coaches like what they see this spring.

“What you see is that he’s actually got that ‘grown man’ weight on, and it’s good weight, good strength, good muscle”, defensive coordinator Teryl Austin told Missi Matthews at minicamp yesterday. “He’s a big, big man, and he showed some good promise last year, so we’re expecting him to build on it coming into his second year. And I think he understands the NFL game a lot better this year. I expect him to make a nice jump for us”.

The Steelers drafted Loudermilk before they would have had any idea of Tuitt’s future status. They traded into the fifth round in order to draft him, giving up a 2022 fourth-round pick to do so, because they thought that highly of him, acknowledging that you would have to value that player as at least a fourth-round pick to pull the trigger on that trade.

Despite spending his first game of the season as a healthy scratch, where he would likely have stayed all year if not for others being injured, he ultimately played in six total games, including the postseason, missing one due to injury himself, and compiling over 300 defensive snaps in the process. Tuitt played under 400 snaps during his rookie season in 2014. And he didn’t miss a game.

At the moment, the depth chart probably has Loudermilk positioned to be the number three ‘end’, behind Cameron Heyward and Chris Wormley, the latter of whom was the fill-in starter for Tuitt all of last season while he was on the Reserve/Injured List.

The Steelers did draft DeMarvin Leal out of Texas A&M in the third round in April, but there’s no telling what his readiness will be like by the start of the regular season. Just because he was a higher draft pick doesn’t mean he would come in more ready—or that he is more ready to contribute now than Loudermilk is.

While I do think some need to pump the brakes a bit in terms of managing expectations for a second-year former fifth-round pick whom most thought should have gone undrafted at the time he was selected, I think anybody with some sense of what to look for will have observed his improvement over the course of his rookie season.

Getting that first year under your belt and coming in the following offseason can be big for any player, having that experience from which to learn, and to figure out how to put yourself in a position to succeed. By the observations of his coaches and teammates, Loudermilk appears to have done that.