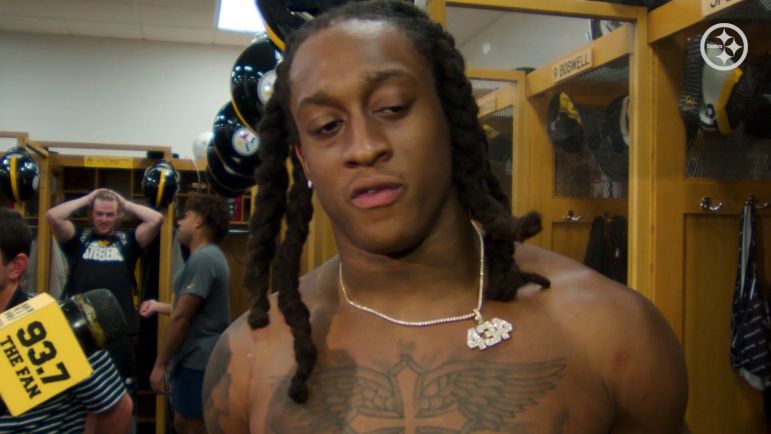 Terrell Edmunds has been a four-year starter at strong safety for the Pittsburgh Steelers since he was named their first-round pick in the 2018 NFL Draft. He’s spent most of that time working alongside Minkah Fitzpatrick. He nearly lost that via free agency before re-signing—and he’s not about to lose his spot in the pecking order next to Fitzpatrick now that he’s back, either.

While the Steelers prioritized adding depth in the secondary, signing veteran starting safety Damontae Kazee just after the 2022 NFL Draft, Edmunds isn’t particularly interested in listening to questions suggesting that his starting job is not secure—a question he was asked twice yesterday.

“I feel like I’m the starter”, he said, the first time he was asked about a potential competition for the job with the newcomer, Kazee. “It’s just going out there and competing. He’s gonna help us out the best way he can. Definitely no doubt in my mind about the starting position, but we’re still out there competing every day”.

The Steelers were connected with three safeties in free agency—Edmunds, Kazee, and Tyrann Mathieu. They had contact with all three, and ended up signing the former two. Kazee had to wait, ultimately signing a veteran-minimum contract. Edmunds signed a one-year deal under the Four-Year Player Qualifying Contract conditions, which will pay him $2,537,500 this year, with a reduced cap hit of $1,187,500.

Kazee, who will be 29 next week, was a fifth-round draft pick by the Atlanta Falcons in 2017. He was a three-year starter there beginning in his second season, and played under a one-year deal with the Dallas Cowboys last season. A DWI incident severely impacted his potential market this offseason, however, and he considers himself grateful the Steelers gave him this opportunity, yet there was never any doubt that he could play. Nor is there doubt in Edmunds’ head about his own ability, and his role.

“I feel like it’s locked down”, he said of his starting job. “I’m definitely gonna be competing every day. That’s just a part of football. Each year you’ve got to compete. But at the same time, I’m still confident in myself, still going out there, being a leader, trying to help out guys the best way I can”.

They only carried four safeties last year—Fitzpatrick, Edmunds, Killebrew, and Norwood—but will have to find room for a fifth with Kazee this time around. While he may not be gunning for a starting job, he will have some type of role, both as a backup and sub-package option.