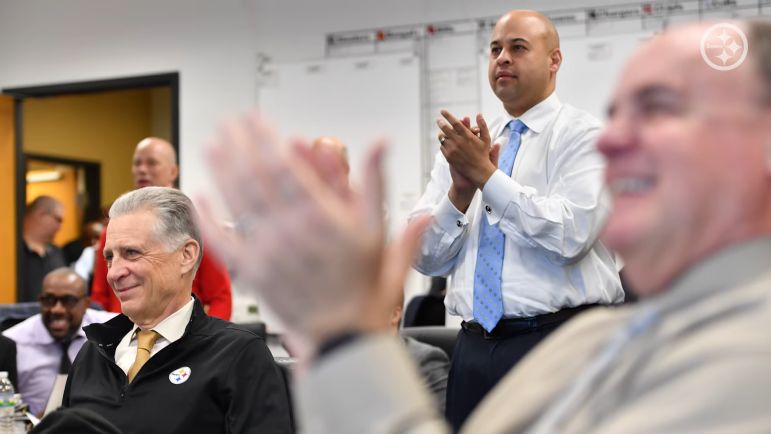 In a salary cap world, it’s never too early to forecast ahead in the NFL.

According to Pro Football Focus’s three-year salary cap analysis that dropped Tuesday using figures from OverTheCap.com, the Steelers have more than $171 million in usable salary cap space between 2022 and 2024. That figure ranks eighth in the NFL. However, with active draft capital, total prorated money, top 51 veteran valuation and 2023 UFA valuation, the Steelers rank 10th overall in the salary cap analysis outlook, meaning the Steelers under new GM Omar Khan will have significant wiggle room in the years ahead with such a young roster, especially offensively.

Of course, a lot of that space opened up due to the retirement of Ben Roethlisberger, which left little lasting damage tahnks to a negotiated pay cut entering the 2021 season.

“The Steelers were able to see their way through the end of the Ben Roethlisberger era without too much lasting damage — in part because of their efforts to negotiate a pay cut as he entered his final season in 2021. They have their work cut out for them in a strong AFC North as head coach Mike Tomlin looks to continue his streak of fifteen consecutive seasons without a losing record, but they were able to spend in free agency this offseason — something they generally don’t care much for regardless of their financial standing — which could go a long way in keeping that record intact,” PFF’s Brad Spielberger writes regarding Pittsburgh’s ranking 10th overall. “An unfortunate early retirement from standout interior defender Stephon Tuitt, who tragically lost his brother in a hit-and-run in 2021 and was away from football last season, leaves a big void on the interior of Pittsburgh’s defense. The unit is loaded with talent elsewhere, including the league’s new highest-paid safety in Minkah Fitzpatrick.

“The main driving force behind Pittsburgh’s relatively healthy cap is the fact its entire arsenal of offensive weapons is on rookie contracts, and it’s one of the stronger top-to-bottom units in the NFL no less,” Spielberger added. “Add in first-round quarterback Kenny Pickett, and you see how the Steelers rank dead last in total cap allocation on offense at just $61.1 million. This helps to offset the defense, which has the second-most cap allocated to it in the NFL at $117 million.”

In all seriousness, it shouldn’t be a surprise that the Steelers are in good shape overall from a salary cap standpoint. While the Steelers currently have the highest-paid defense featuring stars in T.J. Watt, Minkah Fitzpatrick and Cam Heyward, the Steelers also have the cheapest offensive in the league, largely due to the number of players still on rookie contracts on that side of the football.

That certainly helps from a team-building perspective as the Steelers are very clearly working towards getting back to a physical style of football on both sides of the football, playing true Steelers football that won time and time again for a long, long time in the NFL. Will that work in today’s NFL? That remains to be seen, but the Steelers certainly have the flexibility to adjust on the fly when it comes to the salary cap space that they have.

While they do have a ton of space coming up in the next three years, don’t expect Khan to change course with the franchise and become a big-spending GM in today’s NFL. The Steelers will stick with what works, which is building through the draft and then retaining their key players on second contracts that are market appropriate. Having that salary cap space will help them be able to retain more draft picks in the future, should they so choose to.

Of course, salary cap space and flexibility doesn’t guarantee success. It’s better to have some space to maneuver though, especially for a team that’s in transition.