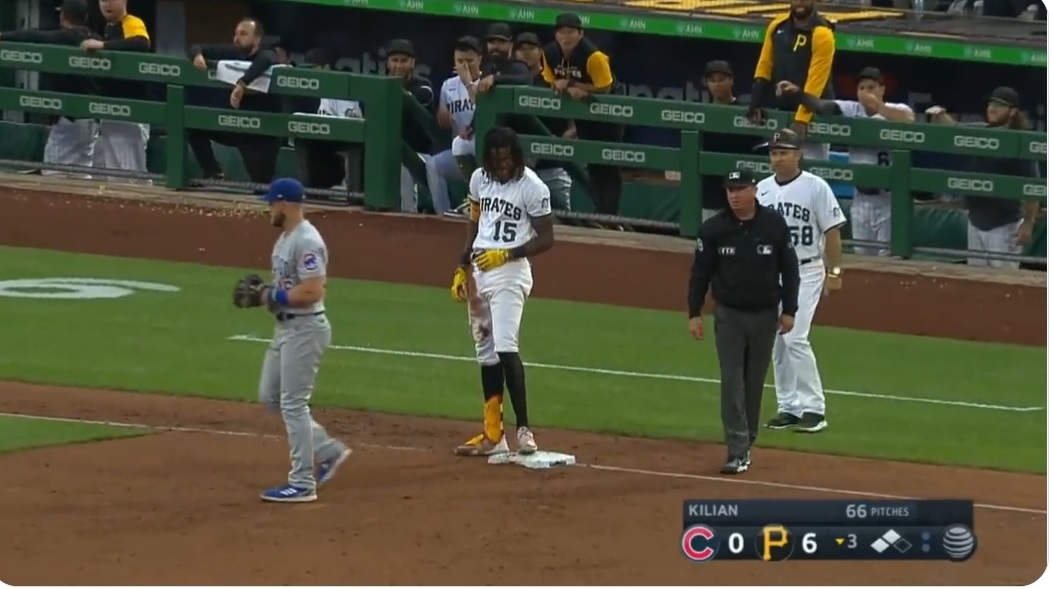 It doesn’t more Pittsburgh than the Steelers’ rookie class taking a Monday night trip to PNC Park to watch the Pittsburgh Pirates have one of their best games of the season thanks to their top rookies. The majority of the Steelers’ rooks showed up to the ‘ol ball game yesterday and were treated to a 12-1 Pirates’ drubbing of the Chicago Cubs, led by rookies Oneil Cruz and Bligh Madris, who did most of the heavy lifting.

Front and center is first-round pick QB Kenny Pickett, who was interviewed during the game. The only rookie missing appears to be WR George Pickens, though Connor Heyward and Calvin Austin aren’t exactly looking thrilled to be there.

But they got to watch one heck of a show. Cruz made his first appearance of the 2022 season after a brief callup last year. He didn’t disappoint, launching a 112 mph bases clearing double to the centerfield wall, thrown out at third trying to leg it into a triple.

A three-run double in his season debut!

Welcome back to The Show, Oneil Cruz. 🙌

Cruz also flashed his arm with a 96.7 mph throw from shortstop, the hardest throw by an infielder all season.

Hardest-tracked throw by an infielder this season?

That would be Oneil Cruz, drilling one 96.7 mph for the @Pirates! pic.twitter.com/ESzXqE2MWi

He finished the day 2-5 for four RBIs and two runs scored with an all-around sensational performance. But he wasn’t the only rookie to step up. Outfielder Bligh Madris, making his major league debut, went 3-4 with a pair of RBIs. His first hit was a key one, a two-run RBI single.

Our guy Bligh with his first Major League hit! pic.twitter.com/LoHcefsmwL

Madris also made a great sliding catch later in the game.

Pittsburgh posted seven runs through three innings and comfortably won by eleven runs. Starting pitcher J.T. Brubaker pitched six shutout innings for a well-deserve first win of the year. Pittsburgh moves to 27-39 on the season, still good enough for third place in the division. On the backs of their youngsters, they’ll look to carry momentum from tonight’s game. And hopefully the Steelers’ rookies watching can have similar performances when they take the field this fall.