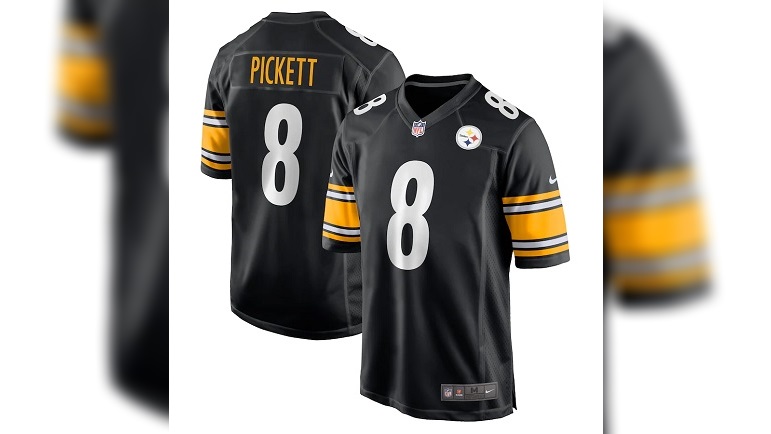 Pittsburgh Steelers quarterback Kenny Pickett might not open the 2022 regular season as the team’s starter but that’s not keeping fans from being excited about his NFL future. On Wednesday, NFL Shop released their top 10 list of player jerseys sold so far for 2022 and the Steelers rookie quarterback out of the University of Pittsburgh is ranked fourth overall on it.

The hottest unis on the market 👀

Whose jersey are you getting next? pic.twitter.com/TA9ppNAgPZ

Of the ten players on the list, Pickett is the only rookie and that speaks volumes. The list includes eight quarterbacks in total of which he is obviously one of. The three players ranked ahead of him on the 2022 jersey selling list at this point are Denver Broncos quarterback Russell Wilson, Buffalo Bills quarterback Josh Allen and Las Vegas Raiders wide receiver Davante Adams. Wilson and Adams are new members of their respective teams as a result of both being traded earlier in the offseason.

Pickett is ranked one spot higher than Tampa Bay Buccaneers quarterback Tom Brady, who decided to not retire this past offseason after indicating earlier in the year that he would be. The Steelers will host the Buccaneers at Heinz Field in Week 6 and it will be interesting to see if Pickett has played any meaningful offensive snaps by then.

The Steelers will open their 2022 regular season on the road against the Bengals and so it’s doubtful you’ll see very many Steelers fans donning Pickett’s jersey at that contest. The Steelers 2022 home opener is in Week 2 against the Patriots and that’s when you can expect to see a ton of fans in Pickett’s No. 8 jersey.

Pickett was the one and only quarterback selected in the first round of the NFL Draft in 2022. He’s currently listed as +155 odds to be the team’s Week 1 starting quarterback this year, according to BetUS. Veteran quarterback Mitch Trubisky, who was signed as a free agent back in March, is the current favorite to be the Steelers Week 1 starter at -220 odds.

Should the Steelers start Pickett Week 1? Here are the odds from @BetUS_Official to be their starting QB that day: