As was first announced a few weeks ago, the Pittsburgh Steelers will resume hosting their 2022 training camp at Saint Vincent College in Latrobe in 2022, and that annual set of practices will get underway in late July. On Tuesday, the Steelers announced that fans will once again get their first chance to see the 2022 team up close at training camp practices open to the public, and the dates for those have now been released.

This year, fans will be able to enjoy a total of 18 practices open to the public taking place at the campus of Saint Vincent College in Latrobe. The Steelers’ players will report to training camp at Saint Vincent College in Latrobe on Tuesday, July 26, and the team’s first practice open to the public will begin on Wednesday, July 27, with the first practice in pads taking place on Monday, August 1.

The Steelers annual ‘Friday Night Lights’ practice at Latrobe Memorial Stadium will resume and take place on Aug. 5 at 7 p.m. The team will have three off days this year on July 31, August 7, and August 14. Their first preseason game of 2022 will take place on August 13.

The Steelers’ final training camp practice open to the public will take place on Thursday, August 18.

Admission to practices at Saint Vincent College is free, but fans must have a ticket to enter. Mobile tickets will be encouraged for quickest and most secure entry into camp. Tickets will be available via Ticketmaster on Monday, June 27. Season ticket holders will first be offered tickets at 10 a.m. ET, with remaining tickets for the public available at Noon ET. 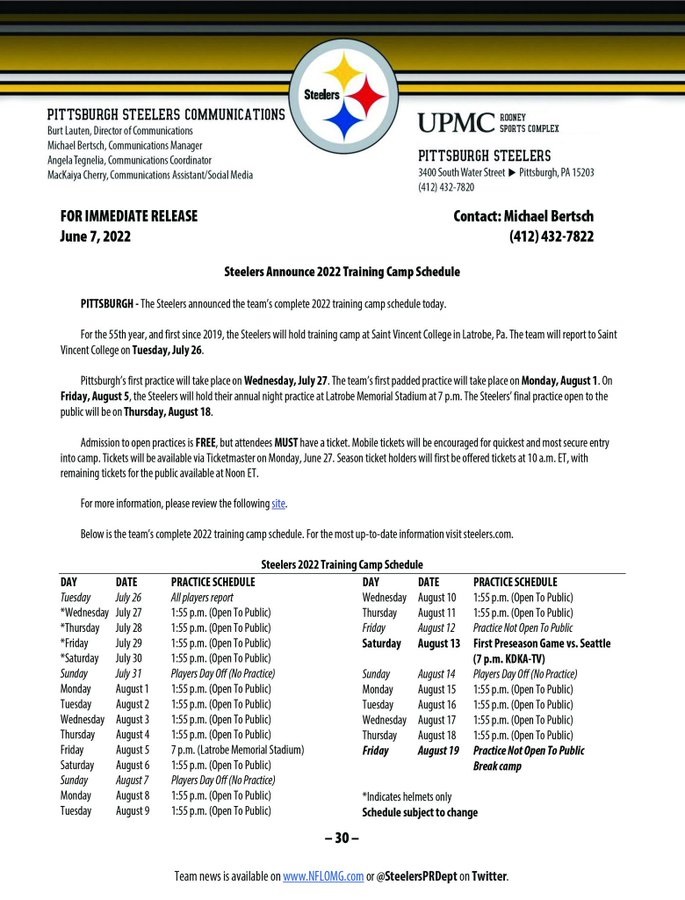