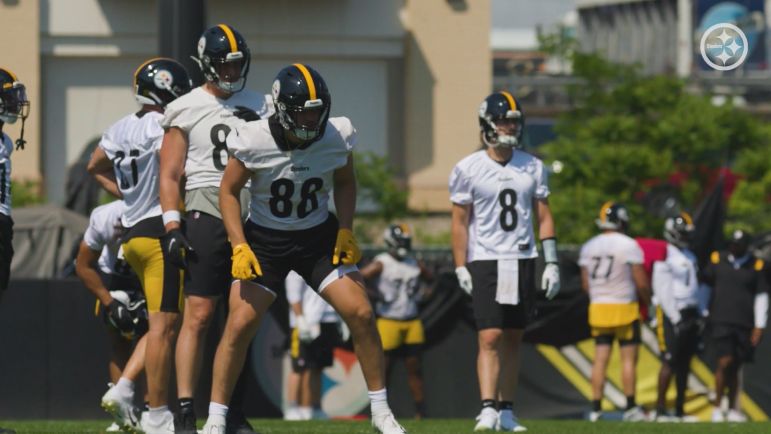 A new quarterback and some added playmakers around him could see second-year Pittsburgh Steelers’ tight end Pat Freiermuth make a leap from an impressive rookie season into potential stardom in 2022.

Two weeks after NFL.com’s Cynthia Frelund highlighted Freiermuth as the Steelers’ most underrated player ahead of the 2022 season, CBS Sports hopped aboard the hype train for the former Penn State star, calling him the Steelers’ second-year breakout candidate that can become a star Tuesday morning.

As a rookie, Freiermuth developed immediate rapport with quarterback Ben Roethlisberger, leading to a 60-catch, 497-yard, seven-touchdown season in the black and gold. Now, with Roethlisberger riding off into the sunset in retirement, Freiermuth will have to develop rapport with the likes of Mitch Trubisky and rookie Kenny Pickett, both of whom should bode well for the sure-handed tight end overall.

“Another second-year player on this list, Pat Freiermuth finished with seven touchdowns for the Steelers last year as a top red zone threat in the offense,” CBS Sports’ Jeff Kerr writes. “His seven receiving touchdowns were tied for the fourth-most by a rookie tight end in NFL history and he’s the fifth tight end with 60 receptions in his rookie season.

“Freiermuth’s second season should reward him with plenty of targets in the middle of the field for Kenny Pickett or Mitchell Trubisky, becoming the security blanket for either quarterback.”

After spending much of his rookie season catching short passes and forcing defenders to miss in space with the ball in his hands, Freiermuth could be in line for a significant jump in downfield targets — especially in the middle of the field — now that Trubisky and Pickett are in the fold.

Having young, mobile quarterbacks that can extend after the play and are willing and capable to push the football down the field over the middle could really unlock Freiermuth’s abilities overall, which in turn could lead to a big second season overall. With added play-making around him with the likes of rookie receivers George Pickens and Calvin Austin III, Freiermuth could see even more space to operate in the passing game in the second year under offensive coordinator Matt Canada.