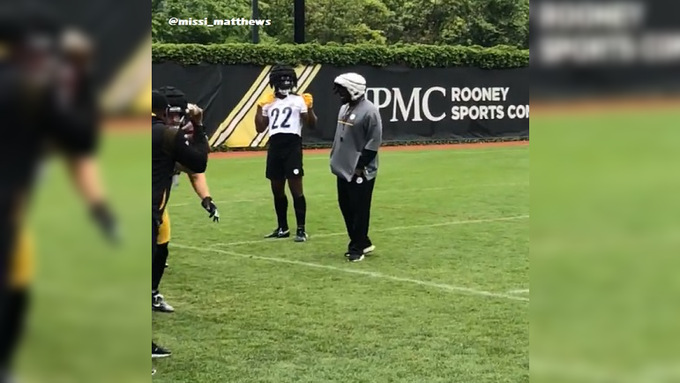 Observers of Pittsburgh Steelers’ practices moving forward will see something new and interesting between the white lines, thanks to a new NFL mandate aimed at player safety.

Hidden are the traditional black and gold helmets with the single-sided Steelers’ logo. In are new, padded Guardian Caps that are designed to provide a soft, padded outer shell to lessen blows. The Guardian Caps are essentially soft, clip-on pads for a helmet.

Founded in Georgia by Erin and Lee Hanson, the Guardian Cap brings a padded, soft-shell layer to the outside of the decades-old hard-shell football helmet and reduces impact up to 33 percent, while also keeping players cooler. The cap clips on to the helmet around the face mask to create a soft shell around the helmet itself, which allows for easy on-and-off use while also protecting the helmets from wear and tear, keeping them safe for game day.

The use of the Guardian Caps comes after a resolution was passed in late March at the annual NFL meetings. The resolution requires offensive and defensive linemen, tight ends and linebackers to wear Guardian Caps for every preseason practice between the start of the training camp contact period and the second preseason game.

The Guardian Caps mandate represents the first significant step in the league’s effort to eliminate all avoidable head contact, which was a goal that NFL chief medical officer Dr. Allen Sills announced earlier in 2022.

The #Steelers wore Guardian Caps for Day 1 of Mini Camp – including Coach Tomlin.

Coach said after practice: It’s a new rule, it’s for their safety. We’re going to make it a non-issue for us and focus on our work. pic.twitter.com/yhKN4CvKBQ

Though it may seem a bit strange to require the Guardian Caps for just training camp and preseason practices until the second game, there’s a method to the NFL’s madness. The first two weeks of training camp produce a high frequency of concussions and a greater degree of overall head contact, according to NFL executive vice president of health and safety Jeff Miller. That period averages roughly 30 concussions per year, according to Miller’s data from an ESPN.com article announcing the mandate.

From there, teams tend to shift to lighter practices in an effort to maintain health and wear and tear as hitting is reduced, taking away the need for the Guardian Caps — for the time being.

How much of an impact the Guardian Caps make during minicamp, training camp and preseason will be something to keep a close eye on. If the number of concussions drastically reduce in that time period, there’s a great chance the NFL requires them full-time in a practice setting.

All in the name of player safety.