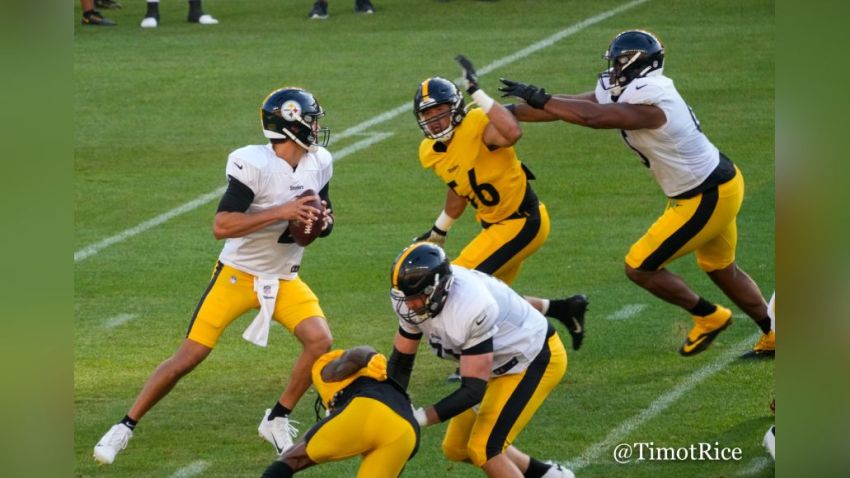 All the buzz surrounding the Pittsburgh Steelers ahead of the start of training camp and the 2022 regular season deals specifically with the quarterback position, where a competition is underway between Mitch Trubisky, Mason Rudolph and rookie Kenny Pickett in an effort to replace the retired Ben Roethlisberger.

For third-year outside linebacker Alex Highsmith, seeing the competition up close and personal has been rather fun for a key piece of the Steelers’ defensive front. Though they’re competing against each other daily, Highsmith — appearing on 93.7 The Fan’s Cook and Joe Show with hosts Ron Cook and Joe Starkey Friday afternoon — believes that Trubisky and Pickett are really good options for the Steelers, and that Pittsburgh’s offense will be in really good hands no matter who wins the job.

It’d better be, because the Steelers’ defense is already slated to carry a heavy load in 2022 once again in a period of transition for the Steelers.

“Yeah, I think  both of them are really, really, really good, and I just from what I’ve seen from both of them, we’re gonna be in good hands no matter who it is,” Highsmith said to Cook and Starkey, according to audio via 93.7 The Fan. “I know Mitch is coming in, he’s an experienced veteran guy. I can tell that he’s a great leader and a great teammate. I think it’s gonna be great for us. For Kenny, his ceiling is like Michael Jordan said, the ceiling is the roof. I know he didn’t mean to say that, but you know what I mean? The sky’s the limit, the sky’s the limit with him.

“He’s gonna be a baller in this league for sure,” Highsmith added. “And so it’s just cool to see those guys having that competition daily against each other.”

Competition in good sense gives positive results, and so far the Steelers have seen positive results in their first quarterback competition in nearly two decades since Roethlisberger took over in the 2004 season and never looked back. To date, Trubisky, Pickett and Rudolph all have a strong relationship, aiming to work together and help each other out as much as possible outside the white lines, while competing their tails off inside the white lines in hopes of winning the starting job.

Once the Steelers get to Latrobe though, the expectation remains that the gloves will come off in the quarterback battle as Rudolph fights for not only a role in Pittsburgh, but potentially a job elsewhere, while Trubisky aims to get back on the field once again as a starting QB, and Pickett looks to get his pro career started in a hurry.

It’s sure lining up to be a rather fun summer ahead for the black and gold.