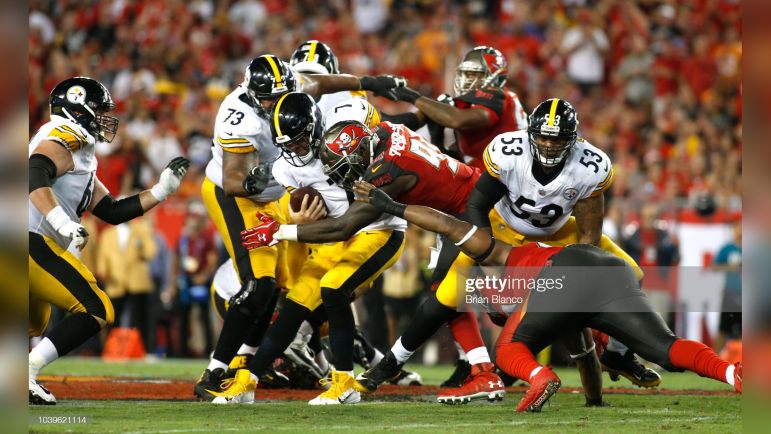 There is one story that has dominated the non-Pennsylvania-based AFC North news cycle lately, and you know exactly what that is. It is certainly the most significant storyline facing the NFL from a public perspective right now. Fortunately, today, we finally don’t have to talk about it.

Arguably the most significant development within the division of the Pittsburgh Steelers’ rivals was the news down in Baltimore, with the Ravens continuing to explore their options to add veteran help at the edge rusher position. Reportedly, they met with and worked out Jason Pierre-Paul for a potential signing, which, while it hasn’t happened, remains a possibility.

Baltimore has struggled to find a consistent pass-rush presence in recent years, really, ever since Terrell Suggs. Tyus Bowser’s seven sacks led the team last season, out of 34 that they had in total, with 2021 first-round pick Odafe Oweh at five. Nobody has hit double digits since Suggs in 2017.

Pierre-Paul, now 33 and going into his 13th season in the NFL, is not going to provide that for the Ravens, most likely, but he’s not far removed from some significant production. While he only had two and a half sacks last season, he had 9.5 in 2020 and 8.5 in 2019, and the year before that, he had 12.5 (tied for the second-most in his career).

Bowser is recovering from a torn Achilles. Oweh had surgery on his shoulder in the offseason. The Ravens drafted David Ojabo in the second round, but having torn his ACL during pre-draft workouts, it’s unlikely—arguably unlikely—that he would be a factor this season. The only healthy outside linebacker currently signed who is of note is Jaylon Ferguson, who had zero sacks last season, with 4.5 in his three-year career.

Baltimore did apply the free agent tag to veteran Justin Houston, which, if he remains unsigned by late July (roughly the start of training camp), his rights will revert back to the Ravens. But even Houston’s presence, at least in 2022, is not a significant boost to their pass rush.

Really, outside of wide receiver, perhaps, the edge rush group remains the weakest of the Ravens’ roster, and has been an issue for the past four or five seasons—during which time, largely thanks to T.J. Watt, the Steelers have had reverse fortunes.

Moreso, I believe, than Houston, Pierre-Paul can still play a bit of ball. His meeting with the Ravens is said to have gone well, but nothing imminent appears to be on the horizon, at least as of the time of this writing.