Last week, we wrapped up ranking all 176 of Kevin Colbert’s draft picks, 2001 through 2021, excluding the yet-to-play 2022 group. We finished off with the top ten and placed Troy Polamalu, who Colbert and the Steelers traded up for in 2003. If you missed it, check out the final rankings and full list, #176 through #1, at the link here.

But I didn’t want to end there. I wanted to write up one more article ranking wrapping up the series with some final thoughts and conclusions. That’s what we’ll do to kick off this Monday.

The first thing I wanted to do was rank Kevin Colbert’s draft classes. Best, worst, and everything in-between. Truthfully, I wasn’t sure how to best set this up. But this is what I did. I assigned a point to each player on the list inverse to how they were ranked. Meaning, player #176 (CB Senquez Golson) received one point while player #1 (SS Troy Polamalu) received 176 points. I assigned those points to each player and totaled each draft class.

The table below reflects the results. I’ve calculated the total points for each class but have it sorted by the most average points to avoid larger draft classes winning out because there were simply more players to be added. I’ve included the year and first-round pick too to jog your memory as to who led the class and you don’t have to think about who the first round pick in 2006 was. If you want to look up a year’s entire class, click here.

Some interesting results. The best class is one I’ve spoken highly of over the years, the 2002 group. No superstars but consistently solid starters like Kendall Simmons, Antwaan Randle El, Chris Hope, Larry Foote, and of course, a seventh round gem in Brett Keisel. Even RB Verron Haynes had some decent value for the team. The only draft pick that year who did essentially nothing for the team was DB Lavar Glover.

The 2017 class was second on Colbert’s list. His first four picks were: TJ Watt, JuJu Smith-Schuster, Cam Sutton, and James Conner. About as strong of a four picks as you’re going to find. It was surprising to see the 2018 class right behind, a group made up of Terrell Edmunds, James Washington, Mason Rudolph, and Chuwkuma Okorafor. Terrell Edmunds was the highest choice at #43 overall but there were no terrible picks who did nothing which helped boost their numbers. The math likes a lack of variance. Even the 2017 class had come-and-go picks like LS Colin Holba and EDGE Keion Adams.

Honestly though, if you asked me to eyeball the classes and not use my subjective math, the 2018 would at least be behind 2007 and 2021 and probably 2011’s group as well. 2010’s haul was also better. In the math, it was hurt by its volume a bit and low score from 4th round OLB Thaddeus Gibson (12 points).

Interestingly, the 2004 class led by Roethlisberger came out as one of the worst. While Big Ben did the heavy lifting, that class had a lot of misses. Outside of OT Max Starks, this class offered little.

Colbert’s worst class was the 2008 group. RB Rashard Mendenhall in the first round, WR Limas Sweed in the second round, OLB Bruce Davis in the third round, OT Tony Hills in the fourth round. Mendenhall was the best pick here which tells you how underwhelming this class really was.

Based off the data, the stretch between 2004 through 2009 was Colbert’s worst. His best stretch came more recently, 2017 through 2021. Of course, more recent classes are more prone to fluctuation and they could move, up or down, in the next 2-3 years. Overall though, based off my rankings and data, the idea Colbert’s draft classes were worse over the years is not really true.

Two more things I wanted to do. First, rank all of Colbert’s first round picks best to worst since they’re the most marquee and notable. Of course, you’ve seen the full list but I’ll do a top ranking of just them to illustrate it a bit better. Their overall rankings on my list will be next to the player’s name.

Overall, a really strong slate of first-round picks. That’s how you get to be GM for 22 years. You need good draft classes. Eight of Colbert’s top ten picks came in the first round (Ike Taylor, Antonio Brown the only exceptions) with thirteen of them ranking in the top 30 with others just outside, like Najee Harris (who should move up) and Kendall Simmons.

Only three first rounders weren’t in the top-half of Colbert’s picks and were/are true busts: Devin Bush, Jarvis Jones, and Artie Burns. Bush will have one more year to change his outlook. What’s interesting is that the Steelers offset that bad first pick in 2013 and 2019 with Le’Veon Bell and Diontae Johnson with their next pick, easing the pain of the first-round miss. In Burns’ 2016 class, they found Javon Hargrave in the third round, two selections later.

Our Clayton Eckert has put Colbert’s picks into a visual form, charting and plotting each selection. 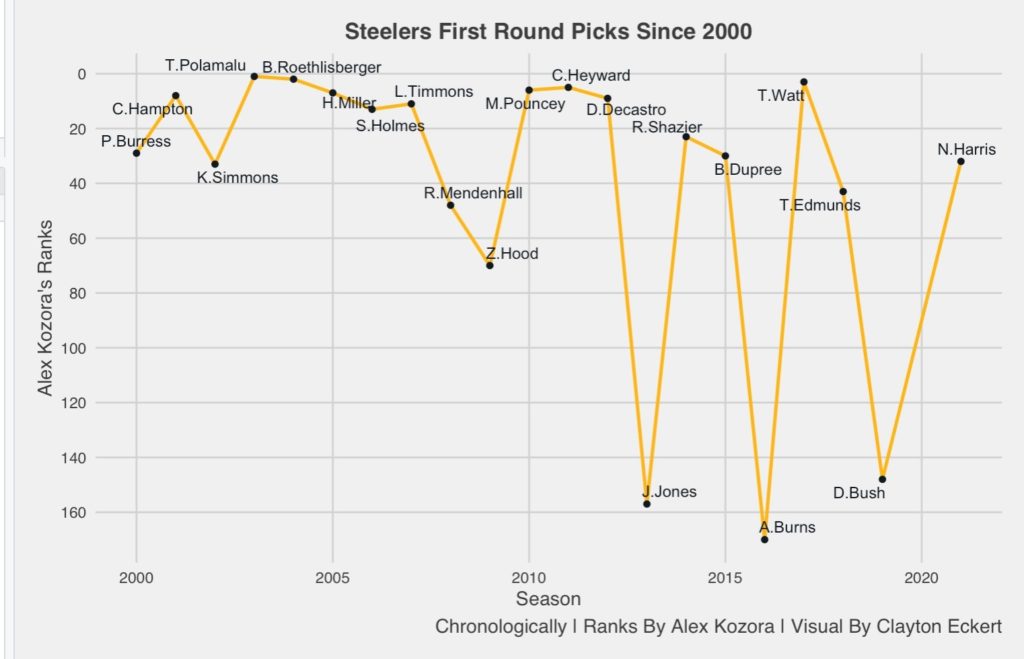 While I said earlier the quality in Colbert’s overall classes didn’t decline as much as some think, there’s no arguing his worst first round picks came in more recent years: 2013, 2016, and 2019, all in Act II of Colbert’s time running the team.

Finally, I want to take a big-picture view of Colbert’s picks to show how tough it is to draft well. Colbert made 176 picks from 2000 to 2001. I’d put the “hey, that pick has sorta worked out” line at #73 with Zach Gentry (#74 is Ryan Mundy, for reference). Everything above that was either disappointing or flat out unproductive. So 73 picks who really helped in positive ways. That’s 41.5% of Colbert’s total picks, far less than half. And Colbert and the Steelers are regarded as one of the best drafting teams over the last decades, something I still believe to be true. It shows the idea of drafting is sort of a crapshoot, less than a coin flip, though obviously it changes by round. Deeper you go into the draft, the more the success rate shrinks. By round, here is the number of picks that were in the top 73.

Strong success at the top. Almost as many second and third round picks part of that group as first rounders and one more third rounder than second, the only increase compared to a higher round.

We’ll see how the 2022 class stacks up. Hopefully Kenny Pickett is high on the list. But overall, this is Colbert’s track record. And overall, it’s an impressive one.