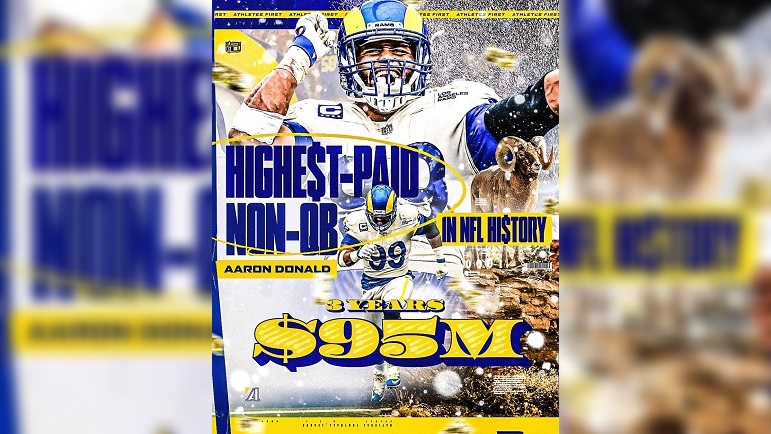 According to several reports on Monday, Donald is getting a $40 million raise as a result of the new deal he’s agreed to sign and is now scheduled to get $95 million over the next three years.

This is not an extension for Donald, who had still had three years and $55 million left on his old deal. He is now guaranteed $65 million over the course of the next two seasons (2022-2023) and can earn $30 million more in 2024 should he still decide to play.

According to Mike Florio of Pro Football Talk, Donald, a University of Pittsburgh product, will receive a $25 million signing bonus as part of this new deal he’s set to sign. His new 2022 base salary will be $1.5 million and that is fully guaranteed. His $5 million roster bonus that was already in place is also fully guaranteed.

In 2024, Donald is scheduled to receive another $5 million roster bonus that will be guaranteed for injury at signing and become fully guaranteed on third day of 2023 league year. A 2024 base salary of $30 million will be available to him if still on the Rams roster come the fifth day of that league year. That would be paid to him with $20 million serving as an option bonus and $10 million as base salary, for cap purposes, according to Florio.

Donald is now the first non-quarterback to pass the $30 million per year threshold. As a result of him signing his new deal, Donald’s 2022 salary cap charge is expected to go from $26.75 million to $24 million.

Unless they play in this year’s Super Bowl, the Steelers won’t play the Rams again until sometime during the 2023 regular season. That meeting will take place at SoFi Stadium in Inglewood, California.