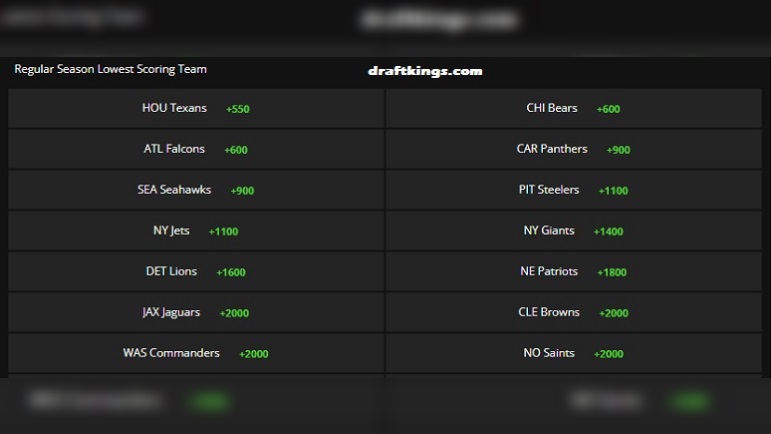 What will the offense of the Pittsburgh Steelers look like in 2022, and will the unit be able to score more points than the 2021 unit did? Well, if you buy into what the odds and the betting public currently thinks as we sit here in late June, the prospects related to the Steelers’ offense scoring a lot of points in 2022 aren’t great.

According to the latest updated odds released by DraftKings Sportsbook, the Steelers are listed at 11-1 to be the NFL’s lowest-scoring offense in 2022. They are tied with the New York Jets with those odds, and only five other teams, the Houston Texans (+550), Chicago Bears (+600), Atlanta Falcons (+600), Carolina Panthers (+900) and Seattle Seahawks (+900) have lower odds. Those five teams all have lingering questions when it comes to the potential play in 2022 at the quarterback position. Four of those five teams, the Texans, Panthers, Bears and Falcons, all scored fewer points than the Steelers did in 2021 on offense.

In 2004, Roethlisberger’s rookie season, the Steelers’ offense averaged 23.2 points per game, and that ranked 10th-best in the NFL. The Steelers, however, finished that 2004 regular season with a 15-1 record, and they advanced all the way to the AFC Championship game.

Since the NFL merger in 1970, the Steelers have never been the league’s lowest-scoring offense in a single season. The closest they have come to that dubious honor was in 1998 when their offense scored just 263 total points for an average of just 16.4 points per game. Only two other teams of the 30 in the NFL at the time, the Philadelphia Eagles and the San Diego Chargers, scored fewer than the Steelers did that season on offense. Kordell Stewart was the Steelers’ quarterback that season, by the way.

Steelers offensive coordinator Matt Canada has his work cut out for himself in 2022, as the team will have a new quarterback in one of Mitch Trubisky, Mason Rudolph and rookie Kenny Pickett, a rebuilt offensive line, and two new young rookie wide receivers in George Pickens and Calvin Austin III. Should the Steelers offense finish in the bottom-third of the NFL in points scored in 2022, Canada will likely be out of a job. 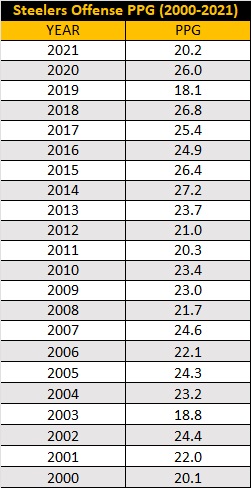