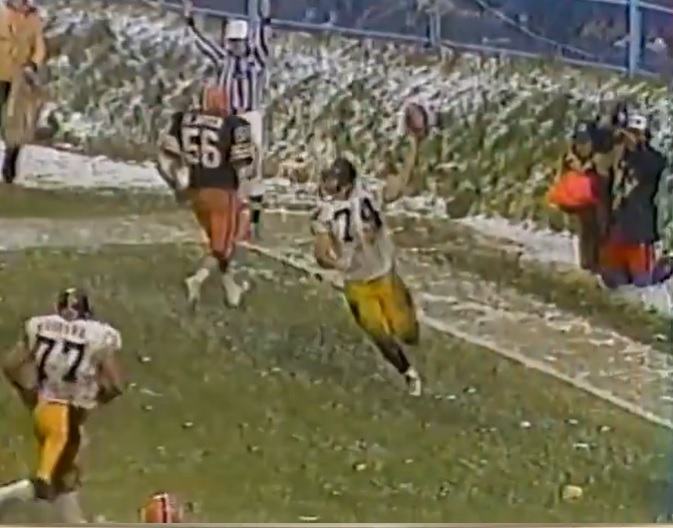 We’re starting things off with OT Ray Pinney’s touchdown in 1981 against the Cleveland Browns.

Ray Pinney was an offensive lineman. And a pretty good one. But for a couple of brief but glorious moments in his career, he might as well have been John Stallworth. Pinney finished his NFL career with a pair of touchdowns. Here’s a flashback of both, starting with the one in ’81.

After Sidney Thornton got Pittsburgh near the goal line, Pinney lined up as a tackle-eligible. Terry Bradshaw faked the handoff, floated left, and found Pinney wide open in the end zone, completely forgotten about. It wasn’t a graceful catch, he cradled it into his body, but it got the job done.

And if you think I’m going to deprive you of Steve Courson dunking the football, you’ve got another thing coming. The cameras didn’t catch if he actually reached over the crossbar but let’s all pretend he did.

Check out the celebration for Pinney as he made his way over to the sideline (after staying out there for the extra point, of course), including a nice big hug from Bradshaw.

That touchdown was the nail in the coffin, a fourth-quarter score to put Pittsburgh up 25-10. They added one more touchdown to win comfortably.

Pinney would find the end zone a second time in 1982, also against the Browns, who apparently didn’t get the message the first time around. The original is usually better than the sequel but his second grab was a higher degree of difficulty, adjusting to a slightly off-target pass.

Pinney’s touchdown there opened up the scoring on the day as Pittsburgh again bullied the Browns, 37-21. Those were the only two catches of his career. I suppose by the Browns figured things out by the next time they saw him (Pinney spent two years in the USFL before returning to the Steelers in 1985).

But we love a big man who finds the end zone not once but twice. And Pinney had a nose for it.