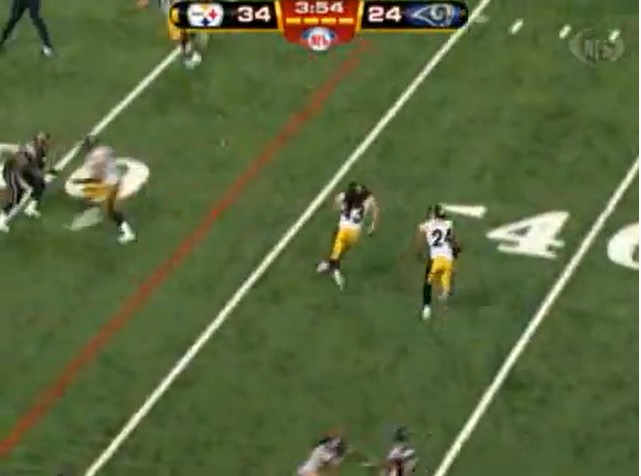 Ike Taylor had the hard-earned reputation of having the league’s worst hands. Great cover corner. Just don’t ask him to take the ball away. But for one very rare and very glorious moment, not only did Taylor catch the ball, he took it to the house.

2007, Week 16 against the Rams. Better remembered as the game Willie Parker broke his leg and effectively ended his career. But it was also a Steelers’ victory. And contained the lone pick-six of Taylor’s long and prosperous NFL career.

Taylor finished off the Rams in the fourth quarter. On 4th and 10, QB Marc Bulger overshot WR Drew Bennett and Taylor leapt into the air and plucked the ball as if he had done it 1,000 times before. He veered right, picked up blocks from Troy Polamalu and William Gay, and sprinted over the goal line, just inside the right pylon, 51 yards the other way.

That score sealed the deal and put Pittsburgh ahead 41-24. Afterwards, the Rams’ frustration boiled over, with cameras capturing WR Torry Holt blowing up at then-head coach Scott Linehan on the sideline. It’s football and tempers flare, but Linehan was often criticized and he was fired four games into the next season. If you want to see that blowup and other highlights from the game, click the link here.

It was one of Taylor’s 14 career interceptions, a number that felt like he could’ve doubled if he didn’t drop so many along the way. But he made them count with the pick-six here and a pick in Super Bowl XL.

2007 was a good year for Taylor, one of his best seasons in the league with a career-high three interceptions. So it’s fitting Taylor’s lone end zone trip came that year. And for a moment, no one made fun of his bad hands.