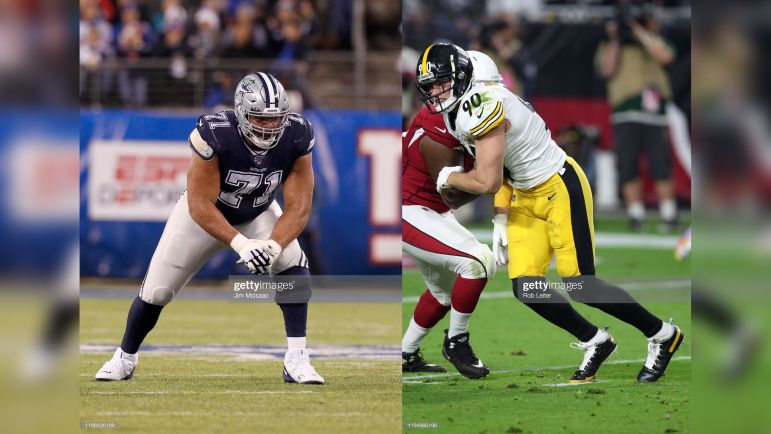 While not everything has gone smoothly for the Pittsburgh Steelers, one area in which they have had their way for a while now is in the pass rush, and that goes for their divisional opponents as well. It’s not that big of a coincidence that their return to prominence as an elite pass-rushing defense happens to fall within T.J. Watt’s time here, either.

Watt has 72 sacks in his five-year career, an average of 14.4 per season. 8.5 of those sacks have come against the Bengals, although he didn’t have one against Cincinnati in 2021. He missed the first game, and was just coming back from yet another injury for the second one, clearly not looking like himself—and then he had 3.5 sacks one week later.

Suffice it to say that he’s a problem for anybody he goes up against, and for the near future, when the Bengals come to town, or they head to Cincinnati, he’s going to be La’el Collins’ problem. The former Dallas Cowboys right tackle signed with Cincinnati this offseason, and told quarterback Joe Burrow that he’s his new bodyguard. It’s one of the highlight matchups to watch this season, according to Brian Baldinger and Gerald McCoy for the NFL Network.

“Joe got beat up last year. That’s a bold statement, and what better way to test it than against this guy, the Defensive Player of the Year?”, McCoy said during the segment about Collins and his ‘bodyguard’ statement. “He’s gonna have to stand on that, and we’re gonna see. I’m excited to see”.

Burrow was sacked 70 times in total last season, including 51 times during the regular season and another 19 times during the postseason. Only two of those sacks in 120 minutes came from the Steelers—one by Cameron Heyward, and one by Chris Wormley.

The Steelers did sack Burrow four times over just one game during his rookie season, though, with Watt claiming two of them (the others from Bud Dupree and Robert Spillane). Cincinnati is on a three-game winning streak over Pittsburgh now, though, so that’s a highlight match either way. For Collins and Watt, it’s even bigger.

“I think when the schedule came out, and I’m La’el Collins, I’m a free-agent acquisition, lock me in at right tackle, be the bodyguard. When do we play the Steelers? Oh, week one! I got this man right here”, Baldinger said. “He’s coming out of the blocks, like, ‘You think I tied the record last year? I’m going for the record this year’. That’s how T.J.’s thinking”.

Watt, of course, won the Defensive Player of the Year Award in 2021 after recording 22.5 sacks during the regular season, tying the all-time NFL sack record with Michael Strahan. But he’s not motivated by sack numbers any longer. He just wants to win games by wrecking them for his opponents. And Collins is the new obstacle in his way. Enough said.