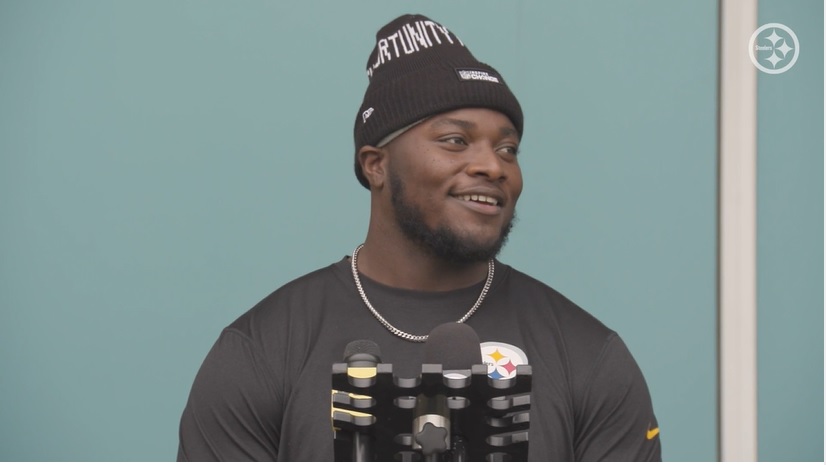 DL Montravius Adams jumped on the moving train last season with the Pittsburgh Steelers, being signed off the New Orleans Saints practice squad on November 30 in attempt to bolster a depleted defensive line that had been getting gashed on the ground by the opposing run game. All told, Adams played 198 defensive snaps (including playoffs) for Pittsburgh, logging four starts in six games and notched 17 total tackles, two TFLs, a sack, and a PBU.

Really impressed with Montravius Adams Steelers' debut. Burst, chase to the ball, ability to flow down the line, his effort/energy.

He had a tackle that prevented a 15+ yard run, maybe a TD, and kept it a two-yard gain. That's what Pittsburgh has needed from their NT. #Steelers

Adams’ performance in a limited showing earned him a two-year deal worth $5 million from Pittsburgh this offseason, likely keeping him in town for at least 2023 as the expected backup nose tackle to Tyson Alualu who is coming back from a season-ending ankle injury suffered in Week 2 of last season. While Adams played more of the traditional nose tackle position for Pittsburgh last season, it was a bit of a changeup compared to his more natural position along the defensive front. Still, Adams saw an opportunity to contribute and didn’t look back.

“I was always really a three-technique end (lined up between the offense’s guard and tackle) — but the Steelers offered the opportunity (to play nose) and I wasn’t going to turn it down,” Adams told Chris Adamski of Trib Sports Live.  “Me, personally, I felt like I still had it — and shoot, if they believed in it, I will believe in it, too.”

As I detailed in a film room breaking down Adams and his game right after the Steelers signed him to the active roster last season, you can see that he in-fact spent a good majority of his time lined up as a three-technique/4i during his time in Green Bay with the Packers. However, Adams wasn’t completely new to the concept of playing head-up on the center as a nose tackle, as he was asked to do plenty of that back in college at Auburn.

This inside/outside versatility could do Adams well in potentially not only serving as Alualu’s primary backup in 2022 but allow him to come in as a sub package interior defensive lineman in nickel and dime defensive formations as well as potentially as a base DE in Pittsburgh’s 3-4 if called to do so. According to Adams, he’s all for playing multiple spots along the DL if it means an increased role for him to make an impact for the defense.

“We interchange and we’re able to play multiple positions, so why can’t I play anywhere?” Adams continued. “Why make myself less valuable? Against certain teams or on certain downs, they might want me in more. Whatever helps the team win, it don’t matter to me. I want to win at the end of the day, and I want to win a lot.”

Adams has had a professional mindset since landing in Pittsburgh, taking on the task of helping a defense that was dead last in the league against the run attempt to stop the bleeding at the end of the season as Pittsburgh made a push to get into the playoffs. He credits Pittsburgh with providing him a family-like atmosphere that he hasn’t experienced since he left Auburn, stating that he would like to finish his career with the Steelers thanks to the relationships built with his teammates, coaching staff, and the fans.

Adams will likely get his chance here in 2022 to prove that he belongs in Pittsburgh’s DL room not only for this season, but possibly for the long haul, as he attempts to build off his brief 2021 season with the team and provide quality play and potentially more versatility to Pittsburgh’s defensive line.

New Steelers NT Montravius Adams' biggest/best play Sunday. Flow against this toss play, doesn't allow himself to be cutoff by the BSG, make a diving tackle on Freeman.

If he can't make this play, Freeman has a LOT of green in front of him. Ends up being just a two-yard gain. pic.twitter.com/WkOOmrNDzS