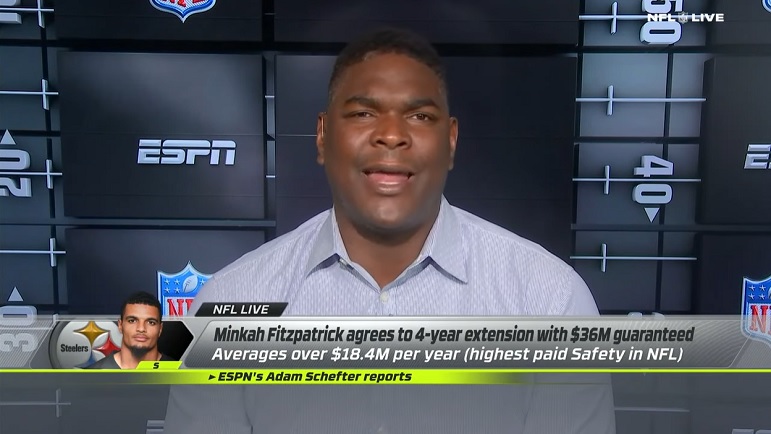 The Pittsburgh Steelers made a long-term commitment to safety Minkah Fitzpatrick this offseason, keeping one of their foundational defensive pieces in house for the foreseeable future. As far as financials go, former NFL receiver Keyshawn Johnson believes that Fitzpatrick has earned everything he has coming to him.

When it comes to money, Fitzpatrick’s deal includes a $17.5 million signing bonus, a base salary of $4 million for this upcoming season, and will have a roster bonus for 2022 of $624,235. Good players don’t come cheap in the modern NFL and when it comes to what he brings on the field, Johnson stated via  NFL on ESPN that Fitzpatrick is one of the best.

“He [Fitzpatrick] is one of the top two cover down safeties in the National Football League. He’s one of those guys that you cannot take off the field on third downs,” Johnson said on NFL Live. “A lot of times, the safeties come off the field but you can match him up in the slot, on the tight ends, and back out of the backfield. Even if you put him at cornerback, you can because of his days at Alabama.”

Needless to say, Steelers fans likely agree with Johnson regarding this matter. Since coming over from the Miami Dolphins, No. 39 has made his presence felt. The two-time All-Pro was in the NFL’s top 10 for interceptions from 2019 to 2020. His impact on pass defense is astounding since his arrival. Fitzpatrick has been essential in the Steelers being tops in the league when it comes to completion percentage in both man and zone defense.

“He’s for sure one of the top safeties in the league and deserves every penny that he’s getting.”

Fitzpatrick’s impact is undeniable though  the Steelers struggled with run defense due to injuries and the unfortunate circumstances surrounding Stephon Tuitt. Be that as it may, the team was still in the top 10 last year defensively as far as touchdowns and passing yards allowed. This trend will isn’t likely to trend downward anytime soon with Fitzpatrick’s services secured.