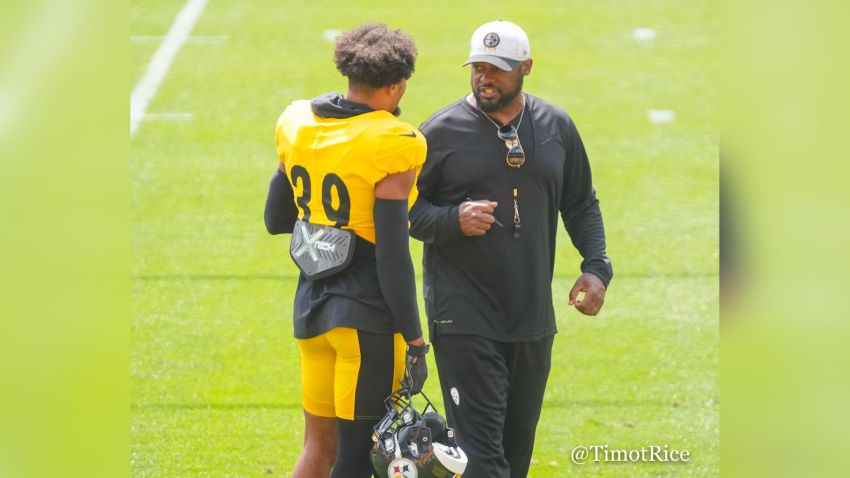 For 15 seasons, Mike Tomlin has had a ton of success with the Pittsburgh Steelers, on and off the field.

That can be attributed to many reasons on the field, from great players, sound coaching, and a great overall organizational philosophy. For young players in star safety Minkah Fitzpatrick and third-year wide receiver Chase Claypool, it comes to two relatively simple things with Tomlin, which happens within the dynamics of the facility: transparency and relatability.

Appearing Wednesday on the Varsity House Podcast with host Shaun Crawford, a former Notre Dame teammate of Claypool and fellow Steelers’ wide receiver Myles Boykin, Claypool and Fitzpatrick talked about what makes Tomlin great. It shouldn’t come as a surprise that all these years later, players who are on the Steelers love playing for him, and those who aren’t are clamoring to get a chance to play for him.

“I would say his transparency. He doesn’ care who you are. You care what you’ve done. He’s a straight shooter. He gonna tell you the truth right to your face,” Fitzpatrick said Wednesday, according to video via the Varsity House Podcast’s YouTube page. “He’s gonna tell you the truth in front of the whole team, whether it’s Ben [Roethlisberger], whether it’s me…He going embarrass you, but it’s not because he’s trying to be a hot shot, but it’s because he’s trying to get you better. He’s trying to motivate you. He’s trying to show other people in the room, like, it don’t matter what you’ve done.”

Oftentimes, that can be difficult to deal with for players of Fitzpatrick’s caliber. At the same time though, players want the straight truth, and as Fitzpatrick said, Tomlin is a straight shooter, no holds barred. He’s going to tell it like it is, even if it’s something that won’t be enjoyable to hear. That’s how issues are avoided overall in a workplace environment, if everyone is up front and honest.

Tomlin very clearly believes in that and lives by that within the confines of the football team. It’s not in a malicious manner either, according to Fitzpatrick.

“If you just played a bad game, you just played a bad game and we got work through it. He’s also not gonna degrade you or talk down to you, but he’s gonna get on you for sure. But he’s gonna keep it real with you,” Fitzpatrick added, according to video via the Varsity House Podcast’s official YouTube page. “And that’s what I respect a lot. Because when you got a coach that can’t look you in the eye and tell you what it is or how it is, that’s not fun as a player. It’s not fair as a player and you don’t wanna play for him.  But Coach T, like he’s very transparent and he’s fun to play for because of his honesty and his transparency and just his approach to the game.”

Fitzpatrick isn’t the first player to state that about Tomlin, and he darn sure won’t be the last for as long as Tomlin remains the Steelers’ head coach. That’s his mode of operation, and it’s worked historically, considering he consistently wins and has competitive teams.

While Tomlin famously doesn’t seek comfort in this industry, Claypool certainly does, at least from a perspective regarding his head coach. Following up on Fitzpatrick’s take on Tomlin, Claypool added on, agreeing with the transparency element with the 15-year head coach, but also crediting his relatability overall as a key reason why he continues to have success in the NFL.

“I was gonna say transparency, but on top of that is just his like relatability. I feel like he’ll talk about a lot of his own stories growing up, like his family and stuff like that,” Claypool added. “So not only do you look at him obviously as a really good coach, but you can start to…feel like you know him a little bit because he tells stories about his mom and how his mom treated him. And then he’ll go ahead and ask you, he’ll pull you aside, maybe like ‘how’s your family doing?’ Or like, ‘is everything good? Is there anything I can do?’ So he does care.

“He truly does care for the players and he’ll make it so that players also care for him because it’s like a  more personal level.”

For some disgruntled Steelers fans regarding Tomlin and his tenure, a common complaint has been that he’s too buddy-buddy with the players and that there’s a lack of discipline because he’s too much of a player’s coach. That may be a fair argument for another day, but the fact of the matter remains 15 years later that players gravitate towards him, and that it’s about much more than football with those relationships.

That means something in this business. No, it doesn’t translate to wins and losses, but there’s never a question of commitment or compete level with the Steelers, largely due to their buy-in with Tomlin year after year.