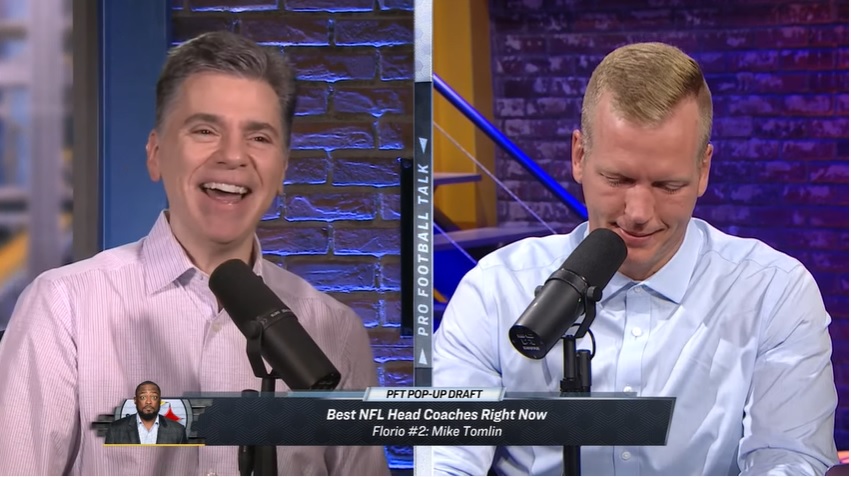 If you were upset over Mike Tomlin being ranked a lowly 13th in PFF’s recent rankings, you’ll much prefer how the fellas over at Pro Football Talk ordered things. Mike Florio and Chris Simms held a mock head coach draft, effectively just a ranking of the best coaches in football. Mike Tomlin went fourth overall with Mike Florio’s second selection. Here’s how Florio explained the pick:

“We take him for granted,” he said via PFT’s YouTube channel. “There’s still a faction of Steelers’ fans that the minute the team encounters any adversity, they want to get rid of Mike Tomlin…are you crazy?”

That vocal minority certainly exists and a simple Twitter search of “fire Mike Tomlin” backs that point up. Thought it might be more present in Pittsburgh, that sentiment exists along any fanbase. Of course, in Florio’s view, it’s far less justified when it comes to Tomlin.

But Tomlin’s track record is not perfect. The Steelers are in the middle of their longest playoff win drought in decades, not winning a postseason contest since 2016 when they made it to the AFC Title Game before losing to New England. The last time Pittsburgh went six straight seasons without winning a playoff game was 1966-1971, the years leading up to Chuck Noll’s arrival and his first few years forming the team. Pittsburgh’s certainly had more regular season success and have playoff appearances but they’re 0-3 in their last three playoff games. That’s not “the standard” Pittsburgh has set.

Still, Florio contends Tomlin would be the hottest name on the market if Pittsburgh ever parted ways.

“The minute they would fire Tomlin, there are teams out there who have coaches with whom they are happy that would say, ‘we love you but you gotta go. We can’t have two head coaches and we have an opportunity to hire Mike Tomlin. I hope you understand.’ It really is fascinating to me. This guy is going to be head coach of the Steelers as long as he wants to be. And he always finds a way. And there’s still that group of Steelers’ fans who want to get rid of him.”

Florio’s on the money here. If Tomlin was fired, he’d have a half-dozen job offers within 24 hours of being on the street. Chris Simms agreed and highlighted some of Tomlin’s best traits.

“The best motivator, the best communicator of the sport.”

Since being hired in 2007, Mike Tomlin has never lost the Steelers’ locker room, a remarkable feat to do it as long as he has. Things haven’t been perfect but Tomlin has kept the group together and keeps the Steelers fighting. 2019 is a perfect example of that, losing Ben Roethlisberger six quarters into the season and nearly making the playoffs with the dubious combination of Mason Rudolph and Duck Hodges. Pittsburgh climbed out of a 1-3 hole last year to make the playoffs. But a postseason win still eludes this group, and 2022 will be a tough year to break the streak given the change at quarterback and the difficulty of playing in the AFC North.

The only coaches the PFT crew picked ahead of him were Bill Belichick, Sean McVay, and Kyle Shanahan. Andy Reid and Matt LaFleur were selected after Tomlin.