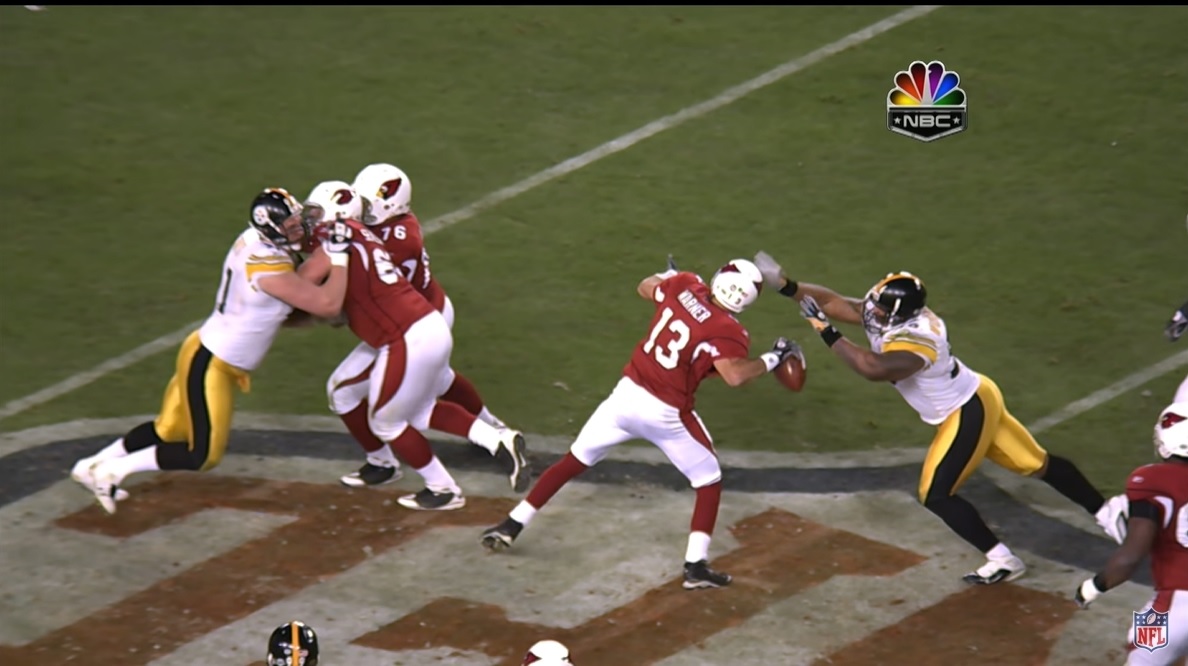 The Pittsburgh Steelers’ 2008 defense had the elite of the elite. James Harrison. Troy Polamalu. Casey Hampton. Some of the best dudes in football. But when it got hot in the kitchen, to steal the Mike Tomlin term, Tomlin didn’t approach any of those men. He turned to 24-year old LaMarr Woodley, in just his second year, to preserve a Lombardi Trophy.

Tomlin joined former Steelers’ safety Ryan Clark, Channing Crowder, and Fred Taylor on The Pivot Podcast in an interview that aired yesterday to talk about Super Bowl XLIII and what happened in the game’s final minutes. Specifically, after the Steelers allowed Larry Fitzgerald to run 64 yards to take the lead followed by Ben Roethlisberger’s incredible two-minute drive, capped by Santonio Holmes’ equally incredible catch. That put Pittsburgh back on top but the game wasn’t over. The Steelers’ defense needed one more stop. And they were still reeling from giving up a fourth quarter lead.

“You know the funny thing I go to Lamar Woodley,” Tomlin said. “Lamar Woodley is the youngest member of the core group. And so at that moment he kind of was probably there better than everybody else. You know how the longer you lived something, the more you got invested, you know, he was probably too young and inexperienced to be really messed up, right? I’m like, ‘Hey Wood, win this game bro. Win this game.’ And Wood in the young Wood arrogance, ‘yeah, I got you coach.'”

As Tomlin and Clark, on the field that night, explained, the Steelers’ defense felt untouchable throughout the season. Mostly because they were. The league’s #1 defense, they were on the cover of magazines and was the league’s envy. For three quarters that Super Bowl night, they held a potent Cardinals’ offense in check, taking a 20-7 lead into the fourth quarter. Things fell apart from there with Fitzgerald going off, finding the end zone twice. Add in a Justin Hartwig penalty that resulted in a safety and Arizona took a 23-20 lead with 2:37 to go. Pittsburgh’s impenetrable defense looked mortal. But after Holmes’ score, they needed to get back on the field with 29 seconds left and make one more stop. And Tomlin called on Woodley.

“The youngest guy was in the best condition to absorb what I was saying. Straight up. He was too young to understand probably the gravity of where we were. Straight up. And he went out and ended the game.”

Arizona moved to the Steelers’ 44 yard line when Woodley came off the edge to strip-sack Warner with Brett Keisel falling on the ball. There’s still some controversy over if Warner actually fumbled but the play stood. And the Steelers won their sixth Lombardi.

While Woodley made the play, Tomlin had a big impact on the game. Not only in that moment talking to Woodley before the defense took the field but Tomlin is partially responsible for James Harrison’s convoy on his pick-six. During the week of practice leading up to the big game, Tomlin noticed his defense slacking off after turnovers. He course-corrected and it paid off to end the first half, Harrison getting several key blocks on his 100-yard run. Check out the 31:52 mark of this video as Tomlin retells that story.

It’s one of several great stories Tomlin shares in his 90-minute conversation on the show. Tomlin also details how his big brother helped get him through that game so watch the whole episode below. It’s one of the best Tomlin’s ever done.