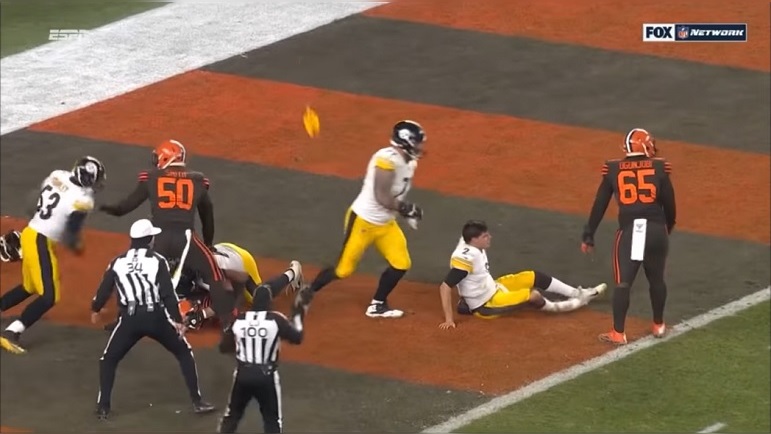 Immediately after the signing of veteran defensive tackle Larry Ogunjobi, the thought process for many regarding the addition of the former Cleveland Brown and Cincinnati Bengal didn’t have much to do with his overall fit. Instead, it conjured up some mixed emotions, considering Ogunjobi’s part in the Steelers-Browns melee Nov. 14, 2019 in Cleveland.

That night, which resulted in a 21-7 win for the Browns, quarterback Mason Rudolph was clubbed over the head with his own helmet by Browns’ defensive end Myles Garrett. Shortly thereafter, Ogunjobi came racing in from behind and knocked Rudolph to the turf as Garrett found himself beneath a dogpile from Steelers’ center Maurkice Pouncey, guard David DeCastro and guard Matt Feiler, who raced to the aid of their quarterback.

Safe to say everyone's mind is made up on who's telling the truth, Garrett or Rudolph, and no one will *know* what happened. But worth pointing out Rudolph said to Ogunjobi "you bitch" after getting blindsided. If he was hurling racial slurs, probably would've used one there. pic.twitter.com/j4iHJyONLk

Now, many of those names are gone from the Steelers, but Rudolph remains on the roster. That night remains a stain on the NFL overall, but for Rudolph, it’s all water under the bridge. According to Ogunjobi, who appeared on the Movin’ The Chains show with hosts Jim Miller and Pat Kirwan on SiriusXM, Rudolph was one of the first players to reach out to him after his signing, welcoming him to the Steelers. Along with Rudolph, guys like Cam Heyward, T.J. Watt, Alex Highsmith, Karl Joseph and Genard Avery welcomed the veteran defensive tackle to the Steel City.

Rudolph’s olive branch sticks out above the rest though.

“Yeah, to be honest, I know a bunch of the guys from just playing against them, you know, just being in the league now just going on my sixth year. So the love’s already there,” Ogunjobi said to Miller and Kirwan, according to audio via SiriusXM. “You know, obviously I’ve been in the division for six years now, seeing the guys like Cam [Heyward], T.J. [Watt], [Alex] Highsmith, those guys all reached out. Karl Joseph, Genard Avery, just a bunch of guys have reached out. Mason Rudolph. You know, the guys just reaching out, happy to have me. So…just excited to get to work.

“I understand the business of the game, I understand how things happen and once again, I’m just blessed for the opportunity. I’m excited to get to work.”

Hearing that Rudolph reached out to him after his signing should put to rest any thoughts that the Steelers’ veteran quarterback has any ill will towards Ogunjobi, or is personally upset with the signing of a player who threw a cheap shot at him while he was without a helmet. It doesn’t sound like Rudolph is worried about bringing in a guy like Ogunjobi, who was suspended one game for his role in the brawl. Nor is Heyward, who came face to face with Ogunjobi that night, jawing at him for laying his quarterback out in the fashion that he did.

One thing I didn't notice until going back and watching it. How pissed off Cam Heyward was. Jordan Dangerfield had to hold him back from confronting Larry Ogunjobi, the player who blindsided Rudolph. #Steelers pic.twitter.com/vVgE2kBxaw

It was certainly an ugly night overall for the Steelers and Browns’ rivalry, as well as the NFL in general. But all parties have seemingly moved on and know that things happen in the heat of the moment. Of course, Ogunjobi escalated the incident in the days after the melee, stating that Garrett told him immediately on the field that Rudolph allegedly used a racial slur, sparking the incident.

Ogunjobi, at the time, was the first Browns’ player to acknowledge Garrett told him about it.

Now, Ogunjobi is on the other side of things, teaming up with Rudolph in the Steel City. Kudos to Rudolph for reaching out to welcome Ogunjobi, and for Ogunjobi publicly acknowledging it to allow both players to get out in front of a story that would likely pop up in training camp.