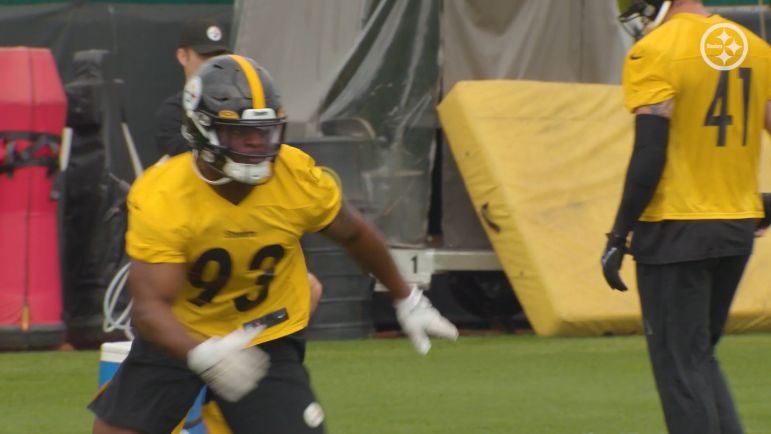 Believing that everybody is against you—whether actual or imagined—can be a powerful motivation for an individual wired in the proper way to respond to such stimulus. We often see this response in professional athletes, even those who are clearly very talented and very gifted.

Sometimes it takes a lot of legwork to manufacture that me-against-the-world mindset. It’s much easier when you’re a seventh-round rookie draft pick who is still learning a new position, which is the case for the Pittsburgh Steelers’ Mark Robinson, who believes there is only one organization who saw in him what he truly has to offer.

“I definitely feel like every team besides this organization didn’t believe in who I was”, he recently said during spring drills, according to Teresa Varley, writing for the team’s website. “But that is fine. I am here for the people who believe in me”.

Robinson, drafted 225th overall out of Ole Miss, was a bit of a surprise draft pick, as the Steelers weren’t necessarily expected to address the inside linebacker position, at least for depth. If they were going to draft one, it was expected to be early, for a prospect who could realistically be seen as a starter within a year or two.

Robinson just started playing defense recently after converting from running back. While it’s a decision that he has come to embrace wholeheartedly after some initial skepticism, he knows that he comes into the NFL with a steeper learning curve than most rookies because of it.

But the reality is that he probably wouldn’t be where he is now—that is, a draft pick on an NFL roster—if he stayed at running back. He was never a highly-touted prospect at any step along the way, and no doubt many were still surprised he was even drafted. But he never doubted himself, because he never doubted his own work ethic and drive.

“It was definitely challenging. There was never a time I thought I would be doing anything else in life”, he said about his relentless pursuit of his dream of having a career in the NFL. “I knew one way or another, I just had to keep on working”.

Robinson talked about leaning on his faith to get him through the uncertainty of his position, knowing that he was taking great risk devoting so much to what many probably perceived as a long shot. Even getting drafted has defied the odds, but that doesn’t satisfy him..

“I know the work it took to get here. It took a lot for me to get here”, he said, according to Varley, as a multiple-time transfer student who is still adapting to a new position and is now in a new city. “I made it here and am looking forward to keep on doing it”.

He’ll be doing it at a position where the Steelers are currently deep, but wherein there is room to make progress. The only locks at inside linebacker are starters Devin Bush and Myles Jack, with Robert Spillane also being a safe bet. Marcus Allen and Ulysees Gilbert III were special-teams mainstays last season, but not irreplaceable. Second-year former fourth-round pick Buddy Johnson has catching up to do after spending most of his rookie season inactive or injured.