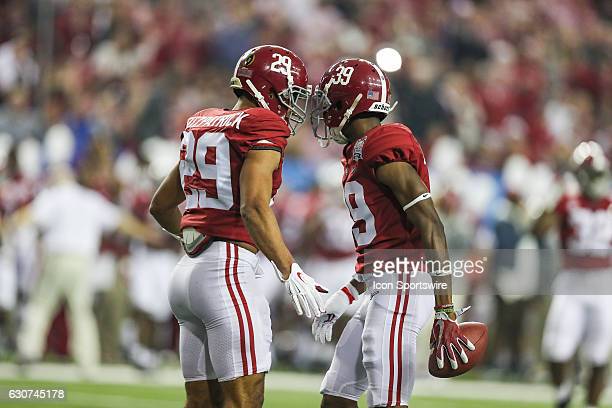 The relationship dating back to their time together at the University of Alabama under Nick Saban for Pittsburgh Steelers’ star safety Minkah Fitzpatrick and new cornerback Levi Wallace has been well-documented to this point.

In fact, part of the reason Wallace signed a two-year, $8 million deal in free agency with the Steelers, leaving the Buffalo Bills, was due to getting the chance to play with his close friend and former college teammate once again.

Now that the two are reunited in the black and gold — and have swapped numbers — Wallace, during his first mandatory minicamp with the Steelers at the UPMC Rooney Sports Complex on the South Side, stated to reporters Wednesday following practice that it’s fun to be with Fitzpatrick again due to the leadership and work ethic he brings to the table, which will do nothing but benefit Wallace in the long run.

Levi Wallace on how he's feeling about the defense, playing in Pittsburgh, learning the playbook, building camaraderie, Minkah Fitzpatrick and more. pic.twitter.com/lOtqIAkFSP

“I’ve definitely taught Minka everything he knows back at ‘Bama, and so it’s like talking to myself back there,” Wallace said to reporters Wednesday, according to video via Steelers.com. “No, I’m just playing. No, Minkah’s just a leader day-in and day-out. Even when we leave here, he always wants to do extra stuff, like going swimming to work on our lungs or get another lift in. And I’m like, ‘yo, Minkah, relax dude. Like I’m 27, you’re just 25.’

“And so, it’s fun being with him again and just the leader he is,” Wallace added. “He’s easy to talk to, easy to ask questions to, as he’s always been. And he wants the best for everybody here. And so just to have a guy like that and the secondary along with TE [Terrell Edmunds], it’s definitely benefitting me for the long run.”

Wallace certainly knows what great leadership and safety play looks like in the NFL, having spent the last four seasons in Buffalo with Pro Bowlers Micah Hyde and Jordan Poyer, helping turn the Bills’ secondary into one of the more formidable units in the NFL overall. With Fitzpatrick though, there’s a certainly level of comfort and familiarity for Wallace, as the two spent three seasons together in Tuscaloosa under Saban.

“Just being back with him and the player that he is, how smart he is, it definitely pushed me back in college, and I just look forward to working with him, because he’s a dog”, Wallace told the Good Morning Football crew on the NFL Network in late March after signing with the Steelers.  “I’ve come from two great safeties in Micah [Hyde] and [Jordan] Poyer, so for me going to a smart safety who knows the game, who can play really well, was important to me, too, and that’s why I decided to go to the Steelers as well”.

Hopefully the two can help replicate the lockdown defense in Pittsburgh that the Crimson Tide experienced during their three years together.