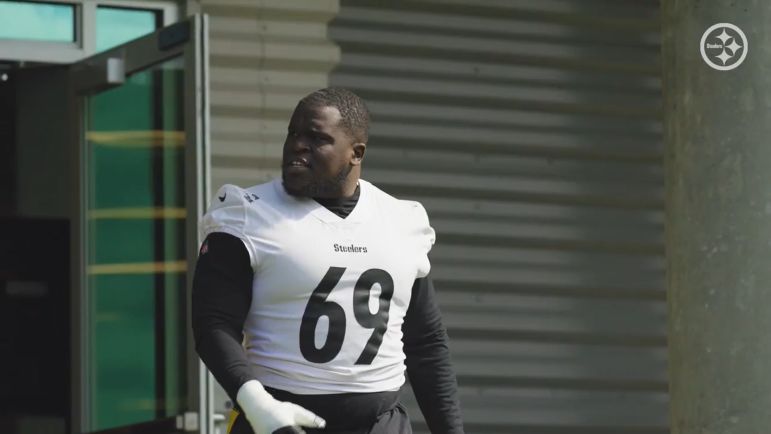 A fourth-round pick out of Louisiana-Lafayette, Kevin Dotson entered his second season a year ago as a full-time starter. He only participated in nine games before a significant ankle injury sidelined him for the rest of the season, but even before then, into the offseason, he was facing questions about how he would perform, and even how dedicated he was to preparation.

Truth be told, the offensive line play from a year ago for the Pittsburgh Steelers isn’t something that anybody should be putting on their resume, but Dotson is expecting more not just from his group this year, but also from himself, as he told Wes Uhler and Arthur Moats on Steelers Blitz, part of the Steelers Nation Radio network.

“I definitely have the Pro Bowl goal. I’ve been having that since I started”, he acknowledged, when asked if that was among the goals that he might have set for himself entering his third season. “That’s the main thing. I feel like I haven’t shown my true potential”.

“People tell you you have good potential. I want to be able to prove it to everybody”, he went on. “I got a friend on the Dolphins, Robert Hunt, the one that got the little touchdown and stuff. Me and him, as soon as we got drafted, we made that pact, like, ‘Hey, Hall of Fame’. You got to start it up sometime. I think this could be the year”.

Hunt was Dotson’s teammate with the Ragin’ Cajuns, drafted in the second round in the same year of 2020, himself by the Miami Dolphins. Most people are aware of who he is because of a spectacular would-be touchdown that didn’t count during a primetime game. But he is also an established 28-game starter, including all 17 games in 2021.

Dotson wants to establish himself in the same way, and then some. After all, he is playing the position that has produced a Hall of Famer in this city in Alan Faneca (even if he had to wait far too long before that was appropriately recognized). As he suggested, you have to start somewhere.

To start with, he has to earn the starting left guard job this offseason after the Steelers aggressively targeted the interior offensive line in free agency, signing presumptive starters at right guard and center in James Daniels and Mason Cole, respectively.

The final interior offensive line position likely comes down primarily to Dotson and last year’s third-round draft pick, Kendrick Green, who started 15 games at center in 2021 and who is more comfortable playing guard.

Dotson started right alongside him for those first nine games before he himself was injured in the Week 10 game against the Detroit Lions. He has not played in another game since that mid-November day, no doubt driving him even harder in his quest to demonstrate his full potential for everybody to see—especially the doubters.