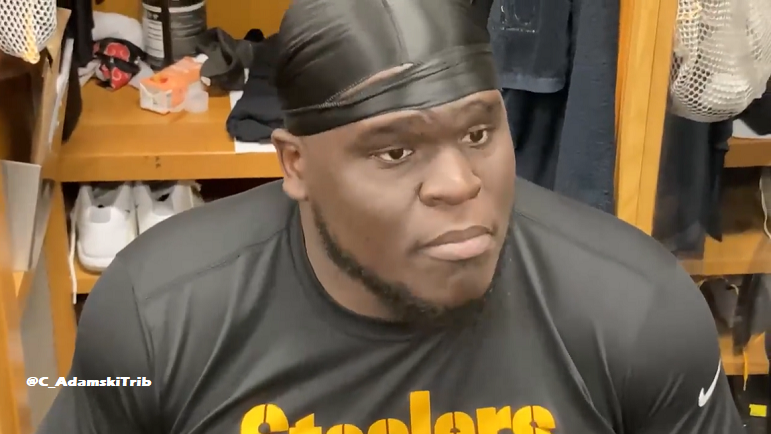 One year after struggling with injuries to his lower body and watching a reworked offensive line struggle after the losses of key veterans to free agency, retirement or injury, Pittsburgh Steelers’ third-year left guard Kevin Dotson is feeling rather confident and comfortable working with some new faces within the offensive line room along the line and in the coaching ranks.

Gone is veteran guard Trai Turner, who provided valuable leadership to a young group last year, as are coaches Adrian Klemm and Chris Morgan, who left for Oregon and the Chicago Bears, respectively. In steps Pay Meyer as the new offensive line coach, and veterans James Daniels and Mason Cole, who came over from the Bears and Minnesota Vikings in free agency, giving the Steelers a significant boost in the trenches while trying to rebuild on the fly.

While Daniels and Cole will provide a significant boost to the interior offensive line, the biggest question mark ahead of the 2022 season for the Steelers along the offensive line is the improvement of Dotson, who started just nine games last season and didn’t quite reach the level of play he showed as a rookie.

Speaking with reporters Thursday on the final day of mandatory minicamp at the UPMC Rooney Sports Complex on the South Side, Dotson stated that he’s feeling comfortable at left guard once again, and is very confident and comfortable working with Daniels and Cole on the interior, according to a tweet from the Pittsburgh Tribune-Review’s Chris Adamski.

Kevin Dotson on the Steelers veteran additions on the OL this year, and on feeling healthy and comfortable at LG in 2022 pic.twitter.com/OmZERppzG8

“Everybody we’ve brought in is competent enough to do their job, and I know that they can do it at a high level,” Dotson said to reporters, according to video from Adamski. “They have the ideas, the knowledge, the capabilities to do everything.”

Combined, Cole and Daniels bring 114 career games played and 87 career starts to the table despite being just 26 (Cole) and 24 (Daniels) years old ahead of the 2022 season. For now, they appear to be significant upgrades at center and right guard over second-year interior linemen Kendrick Green and Turner. Green was never comfortable at center last season and was a significant liability to the Steelers’ offensive line, while Turner just was nowhere close to his former Pro Bowl level, though he was adequate throughout the season.

A renewed confidence within the offensive line will go a long way for the Steelers’ offense, which really couldn’t get out of the gates last season due to the struggles up front. Part of those struggles had to do with the loss of Dotson to multiple injuries in his second season.

Ahead of his third season, he’s feeling great and rearing to get back into action.

The Steelers will need everything to come together for Dotson in 2022. He has a high ceiling at guard and could really turn into a cornerstone for the Steelers’ offensive line, should he be able to stay healthy this season. A lot of his injuries last season were bad luck, getting rolled up on in piles. The Steelers will still be a ground-and-pound team in 2022, so hopefully the bad luck bug will leave Dotson alone in the piles.