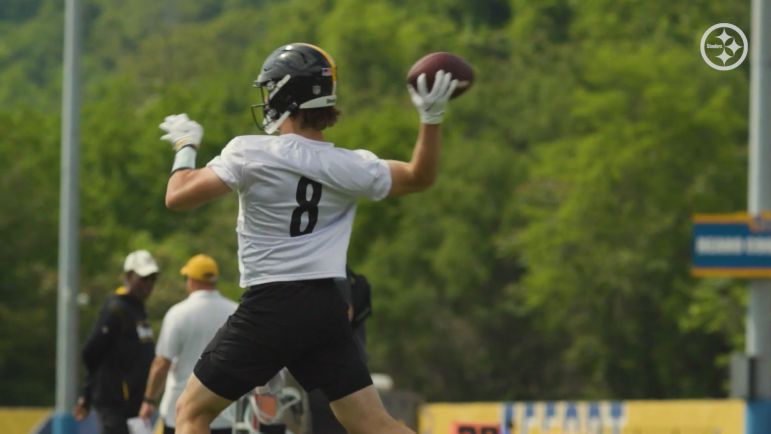 While Tony Racioppi has worked as a quarterbacks coach for some time now, he has gained more attention over the course of the past year, particularly in the first quarter of 2022, thanks to his work with Kenny Pickett, the quarterback out of Pitt who ended up being the only one of his group to go on to be drafted in the first round.

He’s done the interview rounds since then, singing his client’s praises and comparing him to Dak Prescott and Joe Burrow. Most recently, he was on the Cook and Joe Show on 93.7 The Fan to talk mostly about Pickett, and he got the question everyone wants the answer to: does he have a legitimate chance to begin the season as the starter?

“Yeah I think so. I mean, when you’re drafted in the first round, you’re drafted to play”, he told his hosts. “But also, he knows it wasn’t gonna be, ‘Hey kid, here’s the ball’ the first day he walks in the building. He’s got to earn this thing, and he will. You want to be a day-one starter, and if he’s not, he’s gonna work towards being a starter halfway through the year, and if that’s not it, he’ll be ready for next year”.

If he is not the starter, then it would be sixth-year veteran Mitch Trubisky, who has 50 career starts under his belt. The Steelers signed the latter to a two-year contract as an unrestricted free agent earlier this year as their first option to replace the retired Ben Roethlisberger. But Pickett is not unfamiliar to competition, as Racioppi is quick to remind.

“Nothing’s ever been given to him and he’s always had to work for everything”, he said. “Every single year he just went out and beat the kid out in spring practice and fall camp and got better, and I expect the same thing with the Steelers. I expect him to go out there and compete every single day and get better and push Mitch, and if it’s a competition, let’s go get it”.

Racioppi has worked with Pickett through his college career and continues to work with him today, spending some of this down time to go over what Matt Canada and the Steelers have been installing this offseason, so he knows the quarterback as well as anybody does. So he also knows how big a jump his numbers took this past season.

Of his 12,303 career passing yards over five seasons, Pickett had 4,319 just last season. Of his 81 career touchdown passes, 42 came in 2021. Yet of his 32 interceptions, only seven. And his completion percentage was dramatically better at 67.2, having never hit 62 percent before. Still, that’s all what he’s done in college. Now he has to beat out an NFL quarterback.

“If they deem him not ready to play yet and they deem Mitch the starter, then he’ll be ready to get better every single day and he’ll be ready whenever his number’s called, I promise you that”, Racioppi insisted. He’d better be.