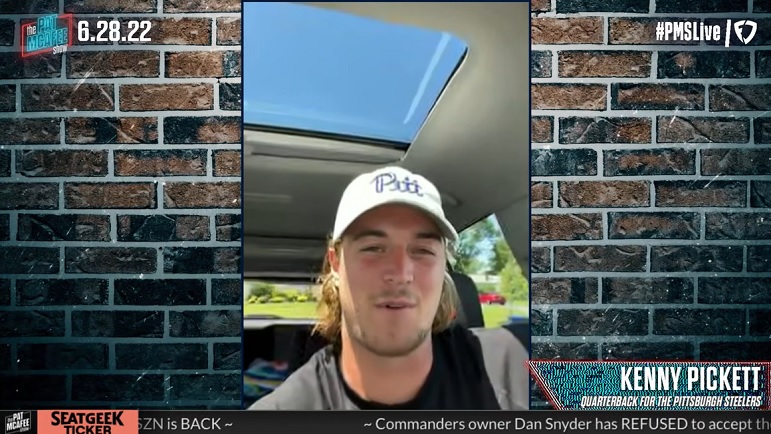 While Mike Tomlin dined with seemingly every draft-eligible quarterback during this year’s pre-draft process, he didn’t break bread with the man he drafted – Pitt’s Kenny Pickett. Pickett confirmed there was no Pro Day dinner between he and the Steelers before and after his Pitt Panthers’ Pro Day. Of course, Pittsburgh knew him as well as anyone else in this class.

Joining Pat McAfee on The Pat McAfee Show Tuesday, Pickett described his interaction with the team during the pre-draft process.

“I missed the dinner part of it,” he told the show. “They must’ve skipped that out on me. They just had me pop in and pop over next door. I’ll have to mess with Coach on that one.”

Pittsburgh had the rare opportunity to watch their franchise quarterback grow literally next door, the Steelers and Panthers sharing the same facility. Pickett told McAfee they eat in the same cafeteria and he knows several of the Steelers’ equipment managers, former workers for the Panthers who were hired by the NFL team. It made a Pro Day dinner less necessary as opposed to Malik Willis, Desmond Ridder, and others, prospects where the team knew far less about the person.

While Pickett is simply opening a different door to go to work, he’s happy to be fully apart of the Steelers’ organization.

“It’s great finally being on that side of the building and getting to know them a lot better. I was really only able to watch them practice and brushing shoulders as I was walking out onto the practice field. Now that I’ve got a chance to be in the building and work with those guys, it’s a lot different. You can see why they have such a great franchise there.”

Noting Pickett’s comments are partially for house-keeping purposes. The Steelers had previously had a Pro Day dinner with most if not all of their first round picks making Pickett an exception, though one with good reason. Still, Pittsburgh was well-represented at his Panthers’ Pro Day. Mike Tomlin, Kevin Colbert, Matt Canada, and new GM Omar Khan were all in attendance to watch him work out in person one final time before the draft.

That keeps the team’s streak of drafting a first-round player they attended the workout of at over a decade, dating back to 2010 with Maurkice Pouncey. When it comes to the draft, they go with who they know, a process that’s generally worked out well over Tomlin and Colbert’s tenure.

Pickett will battle veteran Mitch Trubisky this summer for the Steelers’ starting job. Trubisky figures to have the edge heading into training camp but it’s the team’s first open competition in more than 20 years. If Pickett works out, it’ll be the last page of Colbert’s legacy. If not, it’ll be a sour end to that book.